Fortunate Gun: How the M60 Became an American Staple 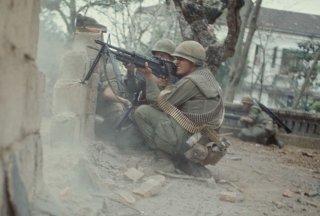 Here’s What You Need to Remember: It has ‘German’ DNA.

Another big problem was with the quick-change barrel. Since the bipod was on the barrel on the original M60, replacing the barrel meant the gun had to be dismounted from a firing position, maneuvered into a position to accept a fresh barrel, and remounted. This was far harder than the original MG42 barrel change.