Is a Fourth Stimulus Check on the Horizon? How Soon and Who Would Qualify? 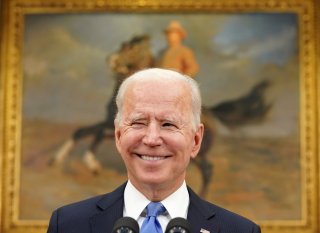 Here's What You Need to Remember: The Biden administration has offered little indication that the president is interested in pursuing additional stimulus payments, though White House press secretary Jen Psaki has said “we’ll see what members of Congress propose” when asked about the chances of more direct aid.

Just as the Biden administration and congressional lawmakers have been trying to hammer out an infrastructure bill, some Democrats have pivoted their focus toward sending Americans additional direct relief, despite receiving $1,400 stimulus payments as part of President Joe Biden’s coronavirus rescue package.

The most recent effort came from a small group of House Democrats that sent a letter to the president, urging him to implement “recurring direct payments tied to economic conditions,” since direct relief is one of the “most effective” forms of federal aid available.

The Biden administration has offered little indication that the president is interested in pursuing additional stimulus payments, though White House press secretary Jen Psaki has said “we’ll see what members of Congress propose” when asked about the chances of more direct aid.

Although millions of Americans still remain unemployed, there’s currently no legislation that’s been put forward outlining a fourth stimulus payment or recurring checks until the pandemic is over.

Half of the credit will be sent out by the IRS in the form of monthly payments starting July 15, where parents could receive checks between $250 and $300 a month per child up until December. The rest of the relief can be claimed on their 2021 tax returns.

The enhanced child tax credits, however, are only for 2021, but Biden has proposed that they are extended through the end of 2025.

Under the previous administration, Congress also passed the first round of stimulus payments, which amounted to $1,200, followed by a second round, which sent Americans $600.

Now, the White House finds itself under pressure from congressional Democrats to pass another round of relief or even multiple rounds. It’s unclear, however, who would qualify for the additional direct aid and how much eligible recipients would get.

Democrats continue to argue that Americans are still struggling due to the economic crisis caused by the pandemic, as they are unable to “put food on the table and keep a roof over their heads,” the group of House Democrats wrote to the president.

In a separate effort to pass additional stimulus payments, a group of 21 Senate Democrats sent a letter to the president back in March, urging him to provide Americans with recurring checks until the end of the pandemic. The lawmakers wrote, “We urge you to include recurring direct payments and automatic unemployment insurance extensions tied to economic conditions in your Build Back Better long-term economic plan.”

But Republicans have balked at supporting another relief bill that pumps federal aid into the pockets of Americans, contending that the stimulus money deterred people from returning back to work, citing the widespread labor shortages.

While it’s unlikely that a fourth stimulus payment would see success on Capitol Hill, Democrats could use budget reconciliation, a legislative procedure that wouldn’t require a single Republican vote, to send more checks to Americans. But that means Senate Majority Leader Chuck Schumer (D-N.Y.) would need to hold the entire Democratic caucus in the upper chamber together to back more stimulus payments.