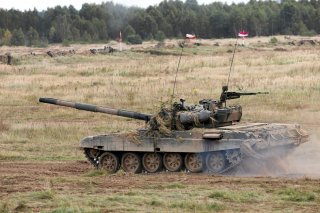 However, in addition to modernizing T-72s, Poland adopted the Leopard 2A4 and Leopard 2A5. Adopting Leopard 2s was the first step towards Westernizing the Polish tank fleet, but it split the ammunition supply chain for Polish tanks as the PT-91s and T-72s in Polish service still used 125mm guns. Bumar plant proposed a solution with the PT-16 and PT-17 tanks, which attempted to fit Western tank tech and 120mm cannons onto the T-72. The goals of the project were to field a secondary frontline tank to the Leopard 2A4 and to keep the Polish tank industry alive.

This article first appeared in May 2019 and is being republished due to reader interest.