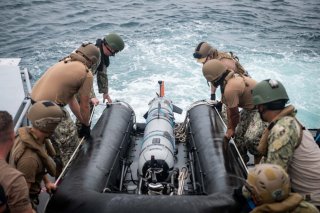 Here's What You Need to Remember: As of yet, any adoption of MEA by any military is unknown. Russia appears to have adopted a new rifle and ammo that seems to have similar capabilities to MEA, in 5.45 caliber.

Until recently, underwater firearms have been niche designs that were limited to the underwater role. Due to the effects of water on conventional firearms, most conventional firearms either cannot be fired safely, do not function properly, or have a laughably small effective range when fired underwater. Early designs for underwater firearms were incredibly cumbersome, using massive magazines loaded with steel darts. Said rifles were limited to underwater use, as they had an effective range of fewer than fifty meters on land. This meant divers were often forced to carry two rifles if they wanted to be effective on land and in water. However, one Norwegian company has developed one kind of ammo that can do both: supercavitating ammo.

The reason for supercavitating ammo’s great effectiveness underwater is belied by its name. When something supercavitates, it creates a bubble of gas in a liquid medium, which largely prevents the liquid medium from slowing said object down. Some Russian torpedoes use this effect to achieve incredible speeds underwater. To achieve this effect with ammo, the tip of the ammo is cut at a certain angle and the appropriate propellants are used. DSG, the Norwegian manufacturer of supercavitating ammo, makes it in three calibers at the moment, 5.56, 7.62, and 12.7mm. It is made under the name Multi-Environment Ammunition (MEA). This ammunition is capable of being fired in conventional rifles with little to no modification, underwater or in the air. The effective range of this ammo is around fifteen meters underwater and over 500 meters in air for the 5.56 round. The larger calibers also have extended effective ranges. Another advantage of supercavitation is the retention of accuracy when shooting in and out of water. While normally significant accuracy and velocity reductions are present when shooting into water, with supercavitating ammo velocity and accuracy are retained. This allows for frogmen to shoot sentries from underwater if their rifles are loaded with MEA ammunition.

In addition, to use by frogmen, MEA in 12.7mm caliber could prove lethal on UUVs equipped with 12.7 machine guns. The significant penetrative power of the 12.7 MEA ammo means UUVs could possibly damage hull sonars, or even helicopters hovering above the surface by shooting them with supercavitating ammo. The oft-quoted figure is that with MEA ammunition, a UUV five meters under the surface can hit a target one km in the air. Tests also show that MEA rounds retain penetrative power even after switching medium, with shots fired from land at a shallow angle into the water still penetrating a thick steel plate that was underwater at the time.

As of yet, any adoption of MEA by any military is unknown. Russia appears to have adopted a new rifle and ammo that seems to have similar capabilities to MEA, in 5.45 caliber. Tula’s new ADS underwater assault rifle, slated to replace the APS (the earlier steel dart firing rifle), is said to be chambered in a new underwater cartridge that is “very similar to standard 5.45x39mm ammunition except for a different specially calculated bullet shape.” From the ability of this new ADS rifle to fire underwater with a cartridge in a similar form factor, I believe that the ADS may be using supercavitating bullets as well.

Charlie Gao studied political and computer science at Grinnell College and is a frequent commentator on defense and national security issues. This first appeared in 2018 and is being reposted due to reader interest.