Friends: We Know Why You Can't Stop Watching This TV Show 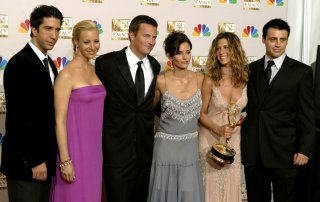 The Friends reunion has undoubtedly been one of the biggest TV events of the year so far.

Over its ten series, the sitcom about a group of 20- and 30-somethings in New York had a massive cultural impact. It attracted plenty of scholarly analysis, including critiques of its gender and race politics. Its scripts inspired my own research as a professor of social interaction.

Love it or loathe it (and I loved it), one of the striking things about Friends was that much of the humour depended on clever conversational devices, not just set-piece jokes or one-liners. Instead, the scriptwriters seemed to embrace the unexpected in conversation.

Think about the conversational rules for a successful invitation.

A: What are you up to this evening?

A: Want to go to the cinema?

The design of an invitation – and any other action in conversation – depends on who we’re asking, what kind of relationship we have, what’s at stake and how important an acceptance (or rejection) is. These sorts of contingencies shape everything we say.

In the example above, B responds positively to A – doing what conversation analysts call a “preferred turn”. Although it might seem obvious that the “preferred” response to an invitation is acceptance, it’s not so obvious what the preferred response to a compliment is.

If an invitation’s “preferred” response is acceptance, the best ways to ensure a positive outcome is to lead up to it, using a “pre” question like, “What are you up to this evening?” This lays the groundwork for a possible invitation, depending on B’s answer. We design what we say to help those we’re talking to avoid having to give negative responses.

Breaching these rules is one way that the Friends’ scriptwriters got audiences laughing from the very beginning.

In one scene, Joey asks Phoebe if she’d like to help build furniture.

And the audience erupts in laughter.

Saying “yes” would mean giving the “preferred” response. It would most likely be done immediately, without elaboration, and it probably would not be funny. We can tell that Phoebe is going to say “no” when she says “Ohhh!! I wish I could”. This looks like it will be the start of a regular kind of rejection, showing an appreciation of the invitation and giving an excuse before turning it down.

But she follows this with: “I don’t want to.” Although this does provide an explanation for saying “no”, it’s not the sort of reason generally found in rejections. The usual way to say “no” is to say that you cannot accept the invitation, not that you don’t want to accept it. In ordinary conversation, such a turn might start an argument.

The one with the invitation

Earlier in the same scene, Ross asks Rachel if she wants to come to help him assemble the furniture.

But just before his invitation, Ross asks, “So Rachel what’re you, uh, what’re you up to tonight?” We can recognise this as leading up to something – it’s a “pre-invitation”. If Rachel is busy, Ross can avoid rejection by not issuing the invitation in the first place.

She replies: “Well, I was kinda supposed to be headed for Aruba on my honeymoon. So nothing!” Rachel could block any forthcoming invitation. But she gives Ross the conversational “go-ahead”.

Ross: If you don’t feel like being alone tonight, uh Joey an’ Chandler are comin’ over to help me put together my, my new furniture.

Rachel: Well actually thanks, but I think I’m just gonna hang out here tonight. It’s been a long day.

Invitations can, of course, be accepted or declined. But these aren’t equally valued alternatives. Rachel turns down the invitation — it’s a “dispreferred” response. Such responses are more intricate than saying “yes”. Just look at how many words it takes Rachel to say “no”.

But because it contains all these features, Rachel has said “no” in the regular way. There’s no breach. It’s not funny. The audience doesn’t laugh.

Pre-questions and “preference” were a regular device for the scriptwriters. For example, in another episode, a new scene starts with Monica asking Phoebe a question.

Phoebe: Oh!! Okay. It’s been so long since you’ve had sex you’re wondering if they’ve changed it?

And the audience laughs.

Rather than treat Monica’s question as a pre-question leading to some kind of announcement — and requiring a go-ahead (like,“what?”) — Phoebe responds to the form not the function of Monica’s question, treating it literally as an invitation to guess what she is thinking.

The Friends scriptwriters’ methods for generating laughter make the usually hidden conventions of language-use visible. Creating humour this way, as well as through misunderstandings and non-sequiturs, was even used by Shakespeare. Whether the humour of Friends will appeal to audiences in another decade or century we cannot say, but leveraging the rules of social interaction is likely to keep us laughing for some time to come.