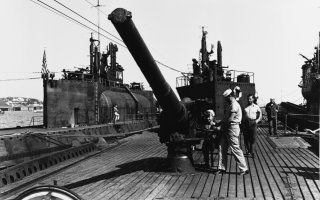 Here's What You Need to Know: Japan had grand visions of attacking coastal U.S. cities.

Over 70 years ago, the Imperial Japanese Navy’s prized Sen Toku I-400-class submarine aircraft carriers were captured and scuttled off the coast of Hawaii. Now a team from the University of Hawaii and the National Oceanic and Atmospheric Administration has rediscovered one of the giant hybrid vessels.

The three I-400-class boats were the largest submarines on Earth until advent of the American ballistic missile sub USS George Washington in 1959.

“The large I-400, with its extended range and ability to launch three [Aichi] M6A1 Seiran strike aircraft, was clearly an important step in the evolution of submarine design,” said James Delgado, director of NOAA’s maritime heritage program, who was on the team that discovered the I-400 wreck site.

In some respects, modern cruise and ballistic missile submarines owe their existence to the World War II-era I-400, which pioneered the concept of using an underwater platform to attack targets on land.

“The I-400 is technologically significant due to the design features associated with its large watertight hangar,” Delgado continued. “Following World War II, submarine experimentation and design changes would continue in this direction, eventually leading to ballistic missile launching capabilities for U.S. submarines at the advent of the nuclear era.”

The brainchild of Adm. Isoroku Yamamoto, who masterminded the Dec. 7, 1941 attack on Pearl Harbor, the I-400s were impressive boats displacing 5,233 tons on the surface and 6,560 tons while submerged. The 400-foot-long vessels were primarily designed as carriers for three Seiran bombers, which were stored in a 102-foot long and 11-foot diameter hangar on the submarine’s deck.

The aircraft could be readied and launched within seven minutes given a proficient crew—propelled off an 85-foot compressed-air catapult on the submarine’s forward deck. Though the bombers were launched by a catapult, the Seirans had to land in the water alongside the submarine and recovered using a collapsible crane.

But the idea behind the I-400 class was to bring the aircraft close enough to mount attacks against the continental U.S.—which given the immense distances across the Pacific continues to be a problem today for potential American foes like China.

Indeed, with the I-400’s 37,500-mile unrefueled range, it could have brought the war to America’s shores—albeit with a relatively tiny payload for each plane: either a pair of 551-pound bombs, a single 1,874-pound bomb or a torpedo.

But it never did. Japan didn't make much use of the vessels during the conflict. It’s also highly unlikely the I-400 class would have made any significant impact on the outcome of the war in the Pacific.

Adm. Isoroku Yamamoto had grand visions of attacking coastal U.S. cities, but those ideas largely died with him when his plane was shot down over the Solomon Islands on April 18, 1943.

In August 1943, the Japanese Empire began planning an attack on the Panama Canal to disrupt Allied shipping. The plan called for up to 10 Seirans operating from the I-400 and I-401 as well as the I-13 and I-14 (which were smaller subs modified to carry a pair of Seirans—in fact all three versions of the Japanese Type A submarines could carry floatplanes).

Planning for the raid continued into April 1945—by the time Japan was nearing absolute defeat. At that point, a revised plan called for a kamikaze suicide attack on the canal rather than a conventional strike. But the attack was aborted in June after U.S. forces took Okinawa—and Japan focused all of its efforts on forestalling what looked to be an inevitable invasion of the home islands.

As part of a planned assault on the U.S. fleet massing at the Ulithi atoll, the I-400 and I-402 would launch a six-Sieran kamikaze raid with aircraft painted in U.S. colors—however Japan surrendered before the attack was launched.

After the war, the U.S. Navy extensively tested the I-400, I-401 and I-402. When the Soviet Union asked to inspect the submarines in accordance with agreements made to end the war in the Pacific, the Navy chose to scuttle the vessels rather then allow the technology to fall into Moscow’s hands.

The I-400 would not be seen again until August 2013, when a manned Pisces research submarine from the Hawaiʻi Undersea Research Laboratory would rediscover the wreck. The researchers identified as the I-400 based on features including its aircraft launch ramp, deck crane, torpedo tube configuration and stern running lights.

“Our ability to interpret these unique weapons of the past and jointly understand our shared history is a mark of our progress from animosity to reconciliation. That is the most important lesson that the site of the I-400 can provide today,” says Hans Van Tilburg, a NOAA archeologist serving on the team.