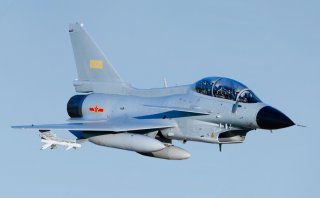 Here’s What You Need to Remember: The future of the J-10 remains doubtful. The J-11 is far more capable in most aspects than the J-10 and has more potential for development, and China appears to be continuing R&D and developing that fighter. The J-10C is currently more capable in the air-to-ground realm as a result of its usage of NATO standard pylons, but this may change in future versions of the J-11.

Weapons-wise, the J-10 was fairly conventional for a multirole fighter of its era. It features three weapon pylons on each wing and three on the belly, giving it similar potential loadouts to the MiG-29 and F-16. Recently J-10s commonly been seen with the GDJ-5 twin munition adapter to increase the amount of ordnance carrying hardpoints to 11. These pylons utilize NATO standard connections, so they are physically compatible with a wide range of Air-to-Air and Air-to-Ground munitions.

Radar-wise, the J-10A uses a mechanically scanned KLJ-3 radar. This was upgraded to a PESA version of the same set on the J-10B, and to an AESA with an unknown designation in the J-10C.

Charlie Gao studied Political and Computer Science at Grinnell College and is a frequent commentator on defense and national security issues. This piece was originally featured in August 2018.