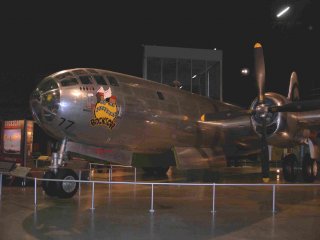 Key Point: The Superfortress was key to American strategy in World War II.

The Boeing B-29 Superfortress was a game changer. First rolling off the assembly line as a production aircraft in July 1943, the Superfortress was the answer to America’s need for a high-level long-range strategic bomber. Conceived in 1938, the Superfortress was designed to increase the range, payload, and speed of its predecessors and was ultimately slated for service in the Pacific Theater of Operations only. The B-29 had a loaded range of around 4,000 miles, could carry a bomb load of up to 20,000 pounds, had a combat ceiling in excess of 36,000 feet, and travelled at a maximum speed of over 350 miles per hour with a cruising speed of 230 miles per hour. No other bomber in the world approached its capabilities.

The Superfortress also influenced American strategy in the Pacific. Already masters of the Solomon, Gilbert, and Marshall Islands, American strategists elected to bypass the Japanese stronghold in the Caroline Islands and instead turn their attention to the Marianas Islands. Their decision was influenced in part by the availability of the new B-29 bomber, which could easily reach the mainland of Japan some 1,500 miles away from the Marianas islands of Saipan, Tinian, and Guam.

The B-29 also brought a number of technological innovations to America’s existing air arsenal. It was the first plane to feature a heated, pressurized crew cabin, which greatly improved crew comfort and combat effectiveness while decreasing their fatigue. With pressurization, the B-29 could operate at significantly higher altitudes than previous bombers and often above the ceiling of enemy fighters. It was also the first bomber to pioneer dual-wheeled tricycle landing gear. Previously, the B-17 Flying Fortress featured a tail wheel and the B-24 Liberator a single nose wheel, which made the latter notoriously unstable on landing. Without discounting these aeronautical innovations, what really distinguished the B-29 from every other bomber in the world was its state-of-the-art gunnery system, which made it quite literally a flying superfortress.

The aircraft featured a General Electric Company model 2CFR55B1 centralized fire-control system, or CFC, which transformed bomber defensive gunnery from a loose collection of independent guns into an integrated gunnery system. The major components of the CFC system were five gunsights, five remotely controlled turrets, five targeting computers, and an electric gun-switching system. Each of the five turrets was operated remotely by a gunner stationed in one of five sighting stations located throughout the aircraft. The firing trajectory was calculated by five targeting computers, each associated with a sighting station and each connected to one or more turrets that could be operated from that single sighting station.

Two turrets were located in the forward section of the aircraft, with the upper forward turret on top of the fuselage and the lower forward turret on the bottom, both positioned slightly aft of the forward pressurized crew compartment where the pilot, co-pilot, flight engineer, and navigator sat. Similarly, the upper aft and lower aft turrets were located on the top and bottom of the fuselage toward the rear of the aircraft forward of its tail fin. The fifth was mounted in the tail facing the rear.

The B-29 carried a crew of 11 airmen, five of whom were gunners. The fire control officer, also called the ring gunner or top gunner, sighted through a plexiglass blister on top of the fuselage and were seated in the middle pressurized crew compartment in a tall chair known as the “barber chair.” The right- and left-side gunners, or blister gunners, were stationed below the top gunner, sighting through blisters on opposite sides of the fuselage. The bombardier sat in the nose of the aircraft, forward of the pilot and co-pilot, and functioned as the nose gunner when not engaged in the actual bombing run. The nose gunner’s gunsight retracted to be stowed out of the way when he turned his attention to the bombsight, which was affixed to the floor between his feet. Finally, the tail gunner sat in the rear of the airplane alone in the aft pressurized compartment.

With all the overlapping fire control possibilities, proper communication among the gunners via the aircraft’s interphone system was paramount, with the fire control officer quarterbacking the whole process. The gun positioning system, with the exception of the tail mount, contained fire interrupter cams, which prohibited the guns from firing on their own aircraft’s wings or tail. However, the guns could fire on their own formation if the weapons were active at the time when control switched between gunners and the guns swung around to the second gunner’s targeting position.

Each of the five turrets featured two air-cooled Browning M2 .50-caliber machine guns. In response to the relative effectiveness of frontal attacks, later versions of the aircraft included two additional .50s in the upper forward turret. To avoid overheating the guns, gunners were instructed to fire in short bursts and then count to three before firing again. Hot gun barrels would expand, decreasing accuracy, or could rupture completely or “cook off” the next round by thermally induced firing. A maximum of 25 rounds could be fired at once but then required at least 15 seconds of cooling off, which must have seemed like eternity when engaged with the enemy. Early B-29 models also included a 20mm cannon in the tail mount. The cannon was controlled by the same sighting and firing mechanism as the rear machine gun turret and could be fired in conjunction with the machine guns but not alone. The 20mm round weighed about twice as much as the .50-caliber round but packed nearly three times its force.

Each gunner manually operated a gunsight, which was connected electrically to the CFC system and contained a 2-inch by 3-inch glass eyepiece. The glass optics had two interchangeable sky filters, enabling the gunner to maintain a clear view of his target through the optics in nearly dark conditions or even sighting an enemy attacking from out of the sun. A reticle consisting of a circle of dots aligned around a center dot, similar to the crosshairs on a rifle scope or the focusing marks on a camera viewfinder, was reflected on the optical glass by a reticle lamp of adjustable illumination.

Each movement in the gunsight, whether in elevation or in azimuth, resulted in an electrically activated corresponding movement to the guns (elevation), the turret (azimuth), or both. The mechanism for transmitting these movements involved differential selsyn generators in the gunsight and at the gun emplacement as well as a servo amplifier and two amplidyne generators, which drove the two motors that moved the guns.

With the exception of the tail mount, the turrets could rotate 360 degrees in azimuth and the guns could incline to 90 degrees in elevation relative to the body of the aircraft. The firing triggers were not “pulled” per se, but rather were buttons located adjacent to the hand wheels and depressed by either of the gunner’s thumbs. An action switch depressed by the gunner’s left palm while in contact with the hand wheel served as a control override for the sighting station. If the action switch was not depressed, such as in the event the gunner was incapacitated, the guns could not be fired from that sighting station. Control of the turret(s) then passed to another gunner’s sighting station regardless of the current settings of the electrical control switches, ensuring that all turrets remained operational.