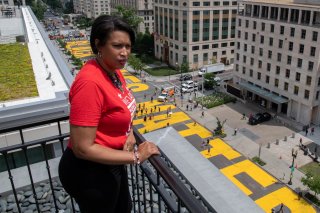 While many spoke of it as a daring political act, for artists like me, it was also an act of urban intervention, an artistic act intended to transform an existing structure or institution, that reclaimed public space back for the public. And she accomplished this with little physical matter at all.

Her action – expressing dissent by marking an oppressive environment – references graffiti, which has been called the “language of the ignored.”

Art scholars note that most types of graffiti are meant to claim or reclaim territory by those who are systematically excluded. “Writers” often work quickly and at night, when they are less likely to be seen and arrested for painting on others’ property without consent.

Bowser’s action would likely be considered vandalism if not for the fact that it was carried out by the city’s Department of Public Works, using city funds. She wielded municipal services as artistic tools to condemn another state-sanctioned action, the violence perpetrated against Black people.

With a few thin layers of paint, the city now loudly and clearly proclaims to assembling protesters, the public and Trump’s official helicopter lifting off from the White House that BLACK LIVES MATTER, presenting that message in the voice of civil authority: “safety color” yellow.

Bowser is the public face of the work. Acting Deputy Mayor John Falcicchio said, in an email to me that explained how the work evolved, that Bowser was inspired to “make a statement at the site where peaceful protestors were attacked to create a photo op on Monday, June 1, 2020.” The “photo op” was the destination of Trump’s walk from the White House, across Lafayette Square, to a nearby church damaged during protests, where he was photographed holding up a Bible.

The idea took form during a brainstorming session with eight artists, Falciccio said, brought together by the Department of Public Works on Thursday, June 4, and who were assigned the job of creating a design to assure protesters of their safety.

The artists and DPW staff began measuring and sketching the letters under cover of darkness at 3 a.m., using the night as a constructive opportunity at a time when cities normally view darkness with anxiety and, in recent weeks, have imposed curfews.

The words BLACK LIVES MATTER emerged from this nocturnal culture. The text was only partially expressed in the early morning light at 6:30 a.m. when onlookers came upon the sketched outlines – the “bubble letters” of graffiti terminology – and pitched in to complete the letters.

Ownership of this collective and democratic work is credited to Bowser, an African American woman and an elected official whom President Trump belittled as “incompetent” on Twitter after she criticized his choice to occupy D.C. streets with federal guards.

Finding herself metaphorically in a spot between armed agents and barbs launched in the Twittersphere, Bowser seems to have answered cultural critic Mark Dery’s question “How to box with shadows” by adopting the tactics of culture jamming, a range of creative practices that include hacking and altering the messages of advertising or urban signs to expose or subvert their meaning.

Like a seasoned culture jammer, Bowser challenged the system by liberating the space from domination. She turned the streets into a canvas.

Bowser situated the phrase BLACK LIVES MATTER as an arrow pointing to Lafayette Square, the one-time marketplace for hundreds of enslaved Black people. The square was the backdrop for Trump’s Bible-brandishing performance and the tableau where Attorney General William Barr directed that law enforcement clear out peaceful protesters to set the stage for Trump’s poorly conceived expedition, which they did with rubber bullets and tear gas.

In graffiti, the location you choose to mark is as important as the content and style of writing. In “Spot Theory,” graffiti writers Jeff Ferrell and Robert Weide point out that the ability to select culturally significant sites and to insert language with precision is an esteemed skill set among street artists.

By making a point of the asphalt’s surface, Bowser’s artwork highlights the street as a site of domination, rebellion and politics: the pavement on which George Floyd’s face was pinned for 8 minutes and 46 seconds by former officer Derek Chauvin; the site of hundreds of thousands of global footsteps marching in solidarity; the turf on which more and more people take a knee to call for an end to racism and police brutality. The yellow street visibly vibrates now.

Bowser’s action is an appeal to reinterpret seemingly utilitarian structures in ways that protect democratic spaces. In a cycle reminiscent of the “call, response, release” championed by author and poet Estella Conwill Májozo, Bowser is “called” by her experiences, and responds creatively. In the “release,” Bowser turns the power of engagement over to the public, entrusting them with future actions.

The day after Bowser caused anti-racist words to be painted on the streets of our nation’s capital, a group of activists showed up with paint and buckets. Commandeering Bowser’s municipal language of “safety color” yellow, they added: DEFUND THE POLICE.