George Patton Was Not Just a General, But a World-Class Athlete 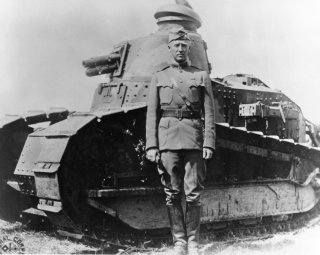 Perhaps because of the way movies, notably the 1970 Academy Award winning “Best Picture” Patton, have depicted the infamous American general, it is hard to think of him being anything but a crusty old man with a bit of bloodlust. Before he had earned the nickname “Old Blood and Guts,” George S. Patton, Jr. had competed in the Olympic Games and as a cavalryman before becoming a pioneer of tank war he designed a saber for the U.S. Army.

As a young man Patton had been far more athletic than academically gifted, and in fact struggled during his first year at the U.S. Military Academy (West Point). He had to repeat his first year after failing mathematics. However, he worked with a tutor, redoubled his efforts and graduated 46th in a class of 103 cadets.

Patton had gone out for football at West Point, but broke both his arms and never played on the academy's team. He ran on the track team and set the school record in the hurdles during his senior year. He also competed in broadswords at West Point and earned varsity letters in track & field, fencing and sharpshooting despite never competing nationally in track or fencing.

He grew up with horses and became an accomplished horseman as well as polo player.

This diverse interest and training in sports made him a natural for the Olympic modern pentathlon—which comprises fencing (one-touch épée), 200 meter freestyle swimming, equestrian show jumping, pistol shooting and a 3,200 meter cross country run. At the age of twenty-six, Lieutenant Patton competed in the 1912 Olympic Games in Stockholm, the year the modern pentathlon was introduced.

Of forty-two competitors he finished in fifth place, and might have earned a medal had it not been for a controversy in the pistol-shooting event. The judges ruled that Patton completely missed the target with one of his shots, while he argued he was so fine a marksman that one of the bullets went through an existing hole. Despite his failure to earn a place on the podium it was a remarkable showing as he had little training as a swimmer and his Olympic preparation was really only his military training at West Point!

Patton was reportedly selected for the 1916 Olympic team, but the games were canceled due to the First World War. By that time the young officer was focused on his military career. And while serving as “Master of the Sword at the Mounted Service School” at Fort Riley, Kansas, Patton began to design a new cavalry saber for the U.S. Army's Ordnance Department.

This cavalry saber, Model 1913, was designed as a cut and thrust weapon, with a two-edged blade and chisel point. The 38-inch long blade was made of forge steel with blood-letting fullers on each side, while the grips were made of black hard rubber with checking. The straight-blade weapon, which was worn attached to the saddle rather than the waist of the trooper, was never apparently used in combat. Yet despite that fact, it has been known since its introduction as the “Patton sword,” and it remained in use with the U.S. Army until the 1930s.

Peter Suciu is a Michigan-based writer who has contributed to more than four dozen magazines, newspapers and websites. He is the author of several books on military headgear, including A Gallery of Military Headdress, which is available on Amazon.com. This article first appeared last year.