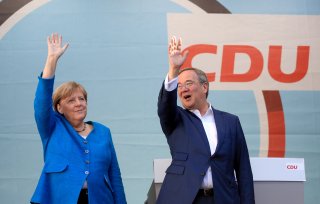 Here's What You Need to Remember: The more fragmented resulting German political landscape, which has materialized in spite of a 5 percent electoral threshold that generally precludes the entry of small parties, is starting to resemble that of the Netherlands and Belgium.

It should come as no surprise that the Christian democrats of the CDU/CSU alliance performed worse than ever in Sunday’s German election, losing a quarter of its support compared to 2017 and falling below 25 percent of the vote. The rapid decline of the member parties of the traditionally dominant center-right European People’s Party (EPP) has been apparent for a few years now, and Germany had arguably become an outlier during the Merkel era.

The victory of the social-democratic SPD, led by incumbent finance minister Olaf Scholz, now leaves Greece and Luxembourg as the only two pre-1995 EU member states where the EPP member party received the largest number of votes in the most recent general elections. The situation in the eastern half of the continent looks a bit better for the EPP, and it will be interesting how that shifting center of gravity will change the positioning of what is still the largest political family in the European Parliament. This is especially true when it comes to core economic issues like fiscal unification and cross-country redistribution, as the eastern member states continue to be relatively low-income.

On the other side of the political center, social-democrats recovered some of the terrain they lost over the past decade or two. While a vote share of just over 25 percent would have been disastrous for the SPD before the late 2000s, it’s a significant jump up from 2017. This too is in line with broader European trends. The liberal FDP and, in particular, the Greens grew their base of support as well, while the far-right AfD and, especially, the far-left Linke performed poorly.

The more fragmented resulting German political landscape, which has materialized in spite of a 5 percent electoral threshold that generally precludes the entry of small parties, is starting to resemble that of the Netherlands and Belgium. If that means coalition negotiations will be of similar duration as well, Angela Merkel, the outgoing chancellor who was not a candidate this time, will remain chancellor for the foreseeable future.