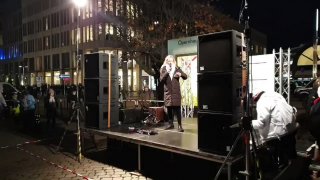 A video from an anti-lockdown protest in Germany has gone viral after a protester compared herself to the anti-Nazi resister Sophie Scholl.

Scholl was a 21-year-old student executed in 1943 for printing and spreading anti-fascist leaflets. She was part of a resistance circle called the White Rose. The protester, who introduces herself in the video as Jana from Kassel, claims: “I feel like Sophie Scholl because I’ve been active in the resistance for months, give speeches, go to protests, hand out flyers…”

During her speech, she is interrupted by one of the stewards at the event who refuses to “do security for this nonsense anymore”. We then see the young woman throwing her microphone to the floor and storming off the stage.

The video has sparked outrage online and dozens of memes have circulated under the hashtag #janaausKassel (Jana from Kassel). Even the tabloid newspaper Bild, not known for its subtlety, called the comparison “in bad taste”. The German foreign minister Heiko Maas accused the protester of “unacceptable historical amnesia” and of downplaying the Holocaust. “Nothing,” he tweeted, “connects Corona protests to members of the resistance. Nothing!”

Germany’s complicated relationship with its past

Anti-lockdown demonstrations have been going on across Germany since June, coming to a head in August when protestors reportedly tried to storm the parliament building in Berlin. The protests are part of a movement called Querdenker (lateral thinkers) that unites different political groups, channelling outrage at what is seen as an infringement on civil liberties. Though also associated with COVID-19 conspiracy theories, it presents itself as a movement fighting to defend freedom.

At the heart of concerns about an emerging “corona dictatorship” is the new Infection Protection Law passed by the German parliament. This allows the government to pursue anti-coronavirus measures even if that means restricting some constitutional freedoms. Some have compared it to the 1933 Enabling Act that gave Adolf Hitler, as chancellor, the power to enact laws without the approval of parliament, effectively enshrining his dictatorship in law. Politicians such as Maas have strenuously rejected any equivalence.

It’s possible to see, in this context, how the protester might have come up with her comparison. She seems to see herself as a young woman standing up for liberty against what is perceived as the government imposing unconstitutional restrictions on citizens’ freedoms. Evidently, many in her audience agreed, as cheers of encouragement can be clearly heard in the background.

Others see the remarks as an appropriation of another person’s remarkable bravery and suffering, that they lack finesse or nuance, creating a reductive historical parallel between a young woman who was guillotined for speaking out against the Nazi state, and a young woman exercising her right to free speech very publicly and freely in a democracy. Jana from Kassel faced the collective ire of the internet, but she doesn’t run the risk of being beheaded for stating her views.

In Germany, it’s easy to see why the comparison with Scholl made people angry. There, she is a household name and, alongside Anne Frank, she has become a cultural icon – the embodiment of resilience and hope in the face of Nazi atrocities. Postwar German memory culture has been dominated by debates about how to remember the past, about what is acceptable or taboo. Over 75 years since the end of the second world war, these debates remain as politically charged and potent as ever.

Maas’s comments suggest that there is something untouchable about figures like Scholl and Frank. It implies a consensus that there are individuals with whom it is never socially, politically or even morally acceptable to compare yourself. By putting figures like Scholl on a pedestal, by making them untouchable, we risk losing sight of them as individuals and as historical agents.

Scholl was extraordinary in standing up to Nazism, but she was also extremely relatable. She is inspiring because she did what others could or would not, and because she was a regular person at the same time. Jana from Kassel should be allowed to identify with that if she wants to, even if the comparison is crass.

There is a balance to be struck somewhere here. It is hard to learn from historical figures whose lives and legacy are reduced to silent and unattainable human monuments, either through a misguided comparison, or by suggesting that such comparisons can never be valid. The furore around Jana from Kassel could be the beginning of such a debate rather than necessarily the end of it. To do justice to Scholl and figures like her, it’s necessary to use this experience as a basis for dialogue and a more serious engagement with voices from the past.