Germany Was Better Off Not Building These 5 Guns 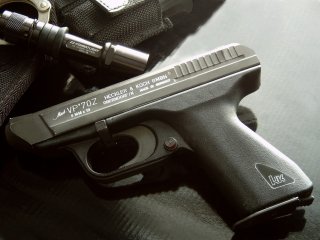 Here's What You Need To Remember: The Mauser firm’s design fully respected all of these criteria, but it resulted in a heavy, unreliable, and inaccurate rifle. The traditional bolt-action requirement added in a ton of mechanical complexity, resulting in an unreliable and heavy prototype.

Germany has a reputation for producing good firearms. From the MP5 to the Gewehr 98, German guns have influenced countless designs and have seen service on every continent.

But sometimes things go wrong. Here’s what could be considered the 5 worst military arms made in Germany.

The second half of the 1800s saw firearms technology advance at a blistering pace. An obsolete rifle could mean a defeat on the battlefield, so designers and governments rushed to keep their standard infantry arm up to date.

The Mauser 71/84 was one of those stopgap designs. After Germany adopted the single shot Mauser 1871 shortly after its unification, it was procured in great number as it was one of the most cutting-edge designs of its time.

But the French soon adopted a repeating rifle with a tubular magazine designed by Alfred von Kropatschek in 1878. This caused Germany to scramble to find a way to turn their single shot 1871 Mauser into a repeating rifle as well.

Enter the Mauser 71/84. Utilizing a tube magazine that was basically a clone of the Kropatschek design, the 71/84 was a cheap and fast way to turn the Mauser into a repeating rifle.

However, the design had tons of issues, being Germany’s first repeating rifle. The magazine’s design was finicky, requiring a yank on the bolt handle to properly raise the round. The center of gravity shifted as the magazine was depleted, and the fully loaded rifle was relatively front heavy and unbalanced compared to the original 1871. The sights were also unsuited for harsh combat use.

The French Lebel which came only two years later had a far more reliable feeding mechanism, despite also using a tubular magazine. Germany again scrambled to catch up, and the 71/84 was replaced by the Mauser 1888 within 5 years.

The first polymer-frame striker-fired pistol was a big flop. The VP70 was meant to be a cheap weapon to arm police or militia forces in Europe, so it featured simple controls, an optional shoulder stock, and the heavy use of polymer to keep costs down. Despite incorporating many innovations, the weapon itself was rather bad.

Shooters have described the trigger as being worse than a staple gun. The 3-round burst in the VP70M is near uncontrollable at how fast it fires. The entire gun is rather bulky and heavy for what it is.

Predictably, not many governments bought the VP70.

The MP5 is one of the most iconic and prolific submachine guns in the world. Featuring a miniature roller-delayed blowback system, the MP5 is controllable, compact, and accurate.

The major complaint with the MP5 usually relates to the manual of arms on the reload. Like most first-gen H&K roller-delayed designs, the MP5 lacks a last round bolt hold open. The user must manually lock the bolt open, then send release it.

The UMP was meant to replace the MP5 as a cheaper alternative. It had a last round bolt hold open, but also retained a charging handle in the same location as the MP5 to make the transition easier for MP5 users.

Unfortunately for H&K, they took too much “off” when cheapening the MP5. The use of simple blowback in the UMP makes the gun significantly less controllable than the MP5.

The extensive use of polymer in the gun also extended to the cocking handle, a traditionally metal part in H&K guns. Early UMP charging handles were known to break when too much force was applied to them, though H&K issued a quick recall and fixed this issue a few months after launch.

Regardless, the MP5 still is the best selling SMG in H&K’s catalog, beating out the UMP.

Nazi Germany was less receptive to the idea of a semi-automatic infantry rifle than the USSR or the United States. When Hitler solicited for designs for a semi-auto rifle from local girls, there were plenty of odd requirements.

The barrel couldn’t have a port in it to vent gas to cycle the action, the rifle must be able to be operated like a traditional bolt action if the semi-automatic operation failed, and the rifle was not to have any moving parts on the surface.

The Mauser firm’s design fully respected all of these criteria, but it resulted in a heavy, unreliable, and inaccurate rifle. The traditional bolt-action requirement added in a ton of mechanical complexity, resulting in an unreliable and heavy prototype.

The competing G41(W) has moving parts on the surface and could not be operated like a traditional bolt action (but rather a straight pull). Yet it was a far more successful design.

The Walther P38 was a relatively innovative design when it came out in 1938, being one of the first double-action/single-action pistols ever made.

After WWII, West Germany needed a handgun, so Walther simply reverse-engineered its own pistols and put it back into production as the P1.

Unfortunately for them, they made a slight alteration to the design that would have lasting consequences. To save weight and money, Walther changed the original steel frame of the P38 to an aluminum frame on the P1.

The P1’s aluminum frame would often crack, reducing the service life of the pistol. Later P1s added in bolts to further reinforce the frame, but even then the P1 was a hopelessly outdated design by the mid-1970s.

The heel release and 8-shot magazine meant the pistol was slow to reload and required reloading often, in comparison to the new series of “wonder nines” that began popping up around that time.

Charlie Gao studied Political and Computer Science at Grinnell College and is a frequent commentator on defense and national security issues. This first appeared in December 2018.