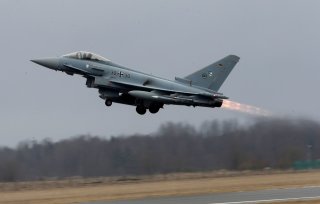 Key point: Like other German weapon systems, the Tornados are underfunded and of August 2014, only 38 of 89 were operational.

The modern German armed forces, or Bundeswehr, were created just ten years after the end of World War II. Cold war tensions and the presence of Soviet troops in East Germany, Czechoslovakia, and Poland made a West German defense force necessary.

The end of the Cold War and the withdrawal of the Red Army from Eastern Europe was a boon for European security. The National Volksarmee of East Germany and the Bundeswehr merged into a new national army. Inventories of ships, aircraft, and armored vehicles were cut by up to seventy-five percent, and the German defense budget was cut further. Germany now spends just 1.2% of GDP on defense, far below the NATO recommended 2%.

In the past year, numerous articles have arisen demonstrating the Bundeswehr’s lack of readiness. Fixed-wing aircraft, helicopters, and other vehicles have been grounded due to a lack of spare parts, bringing readiness rates below 50%.

In the 1980s, the UK, France, Germany, Italy, and Spain teamed up to begin the development of the Future European Fighter Aircraft, or FEFA. The first flight of what would become the Eurofighter Typhoon was in 1994, and Germany accepted its first Eurofighter in 2003. Budget cuts mean that the Luftwaffe will probably accept its last fighter sooner than anyone thought.

The Eurofighter is likely the best non-fifth-generation fighter in existence. A combination of excellent maneuverability, powerful engines, AESA radar, infra-red search, and track sensor, and AMRAAM and Sidewinder missiles make Eurofighter a tough opponent in the air. Eurofighter’s air to ground capability is growing, and the Luftwaffe’s fighters have the ability to carry unguided bombs, laser-guided bombs, and Taurus cruise missiles.

Germany was originally buying 180 Eurofighters, but a cancelled purchase in 2014 means only 143 fighters will be acquired. As of October 2014, only 42 of 109 Eurofighters were in flying condition, the rest grounded by lack of spare parts. At the same time, Germany reportedly halved annual flying hours for aircrews, fearing that the fuselage would become unstable.

Another fighter developed by a European defense consortium, the Tornado was developed by the United Kingdom, Italy, and Germany. Designed to penetrate enemy defenses by going in low and fast, the Tornado was one of the last swing-wing fighter jets. Since the end of the Cold War, however, the Tornado forces have suffered from chronic underfunding.

The German Navy and Air Force received a total of 357 Tornado aircraft. Their numbers reduced after the Cold War, Germany plans to keep the remainder in service until 2025 or beyond. Like other German weapon systems, the Tornados are underfunded and of August 2014, only 38 of 89 were operational.

The latest version of the Leopard II, the Leopard IIA7, incorporates a whole slew of upgrades meant to keep the tank viable until the 2030s. The A7 model features a longer barrel version of the same 120mm smoothbore gun, a third-generation thermal sights, increased composite armor protection, and an auxiliary power unit to run electronics without having to run the tank engine.

In the 1990s, the Bundeswehr replaced the Heckler and Koch G3 battle rifle with the G36 assault rifle. A new design using a lighter, NATO standard 5.56-millimeter bullet, thirty round magazines, and integrated optics, the G36 was supposed to increase the firepower of German infantryman while lightening his load. 176,000 rifles were purchased.

Kyle Mizokami is a defense and national security writer based in San Francisco who has appeared in The Diplomat, Foreign Policy, War is Boring and The Daily Beast. In 2009 he cofounded the defense and security blog Japan Security Watch. You can follow him on Twitter: @KyleMizokami. This article first appeared in 2015 and is being republished due to reader interest.