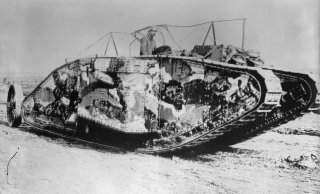 Here's What You Need To Remember: The rifle did a reasonably good job of stopping enemy tanks, which typically had just 12mm of armor protection at that point, but it was really too late to turn or even stop the tide. By the end of 1918, Germany surrendered and the T-Gewehr has largely been forgotten.

Military hardware is not typically an area where there is a "chicken and egg" question as to what came first – as countermeasures almost always come as a result of a new weapon platform. Such was the case of anti-tank weapons, which were developed at the end of the First World War to stop the new tanks.

Today, there are all sorts of shoulder-mounted rocket launchers, mines and even specially designed aircraft that are there to take out enemy tanks. But the granddaddy of anti-weapons was simply a really big rifle.

While the German military would go on to build a formidable armored force – even today, the modern Bundeswehr fields the Leopard II, one of the best tanks ever built – during the First World War tanks were largely an afterthought for the Imperial German Army, which only built a total of twenty massive A7V tanks. At 30-tons the A7V was a monster, one that was heavily armed but slow-moving.

What the Germans needed as much as tanks was something to stop the British and French tanks and this was the Mauser 13.2mm Tank Abwehr Gewehr Model 18 or "Mauser 1918 T-Gewehr." Known simply as the Tankgewehr, it was an upscaled bolt-action rifle that was based on the Mauser action. Unlike the Gewehr 98 – the standard service rifle used from 1898 to 1935, which featured an internal five round magazine – the T-Gewehr was a single-shot weapon that had to be manually loaded each tip. It also differed from other rifles of the era in that it had a pistol grip and bipod.

What the Tankgewehr lacked too was anything to reduce the recoil, including a muzzle brake or even padded buttpad. Shooting multiple rounds could take a toll on the man charged with firing it. The rifle was developed after the British had launched the first full-scale tank offensive at Cambrai in the fall of November 1917, and pushed the Germans back some 20 kilometers.

The massive rifle was chambered to fire a powerful 13.2 TuF (Tank und Flieger-Tank and Aircraft), a .525-cablier jacketed, armor-piercing, steel-core cartridge. Effective range was about 500 meters, but gunners had to fire over iron sights.

Interestingly, the T-Gewehr developed as a stopgap measure. The original plan called for the development of a dual-purpose machine gun chambered for the TuF cartridge that could be used against tanks and aircraft, but the weapon was too complex to be deployed as quickly as would be required. The far simpler bolt-action weapon was thus developed instead. These were rushed out and the weapon began being issued along the front in January 1918. Approximately 15,800 of the T-Gewehrs were produced by war's end.

Two to three T-Gewehrs were issued per regiment, and each was operated by a two-man gun crew. One man would be the primary gunner and would carry the rifle along with twenty of the specially designed TuF rounds, while the second man in the team would carry two shoulder bags with twenty rounds in each, as well as an ammunition box that contained an additional seventy-two cartridges.

The rifle did a reasonably good job of stopping enemy tanks, which typically had just 12mm of armor protection at that point, but it was really too late to turn or even stop the tide. By the end of 1918, Germany surrendered and the T-Gewehr has largely been forgotten.

However, it was the only anti-tank rifle to see service in World War I, and there were later attempts – notably as the British Boys Anti-tank Rifle – to upsize a rifle to take out a tank, but none were remotely as successful as the T-Gewehr.