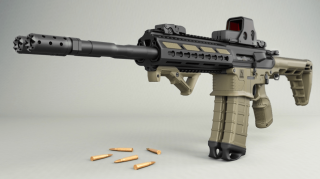 Key point: This gun can shoot more to provide better supression fire. However, this very odd weapon is certainly not for everyone.