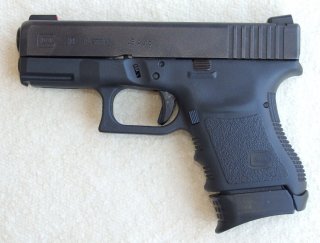 Here's What You Need to Remember: Glock’s .45 subcompact reportedly suffers from less muzzle flip than other large calibers, small frame handguns. The recoil of the .45 ACP round, generally considered a firm backward push is generally assessed as less than one might expect for a lightweight gun. Powerful, reliable, and controllable, the G30 might just be Glock’s ultimate subcompact handgun.