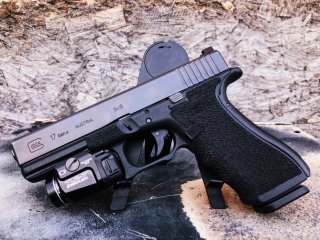 Here's What You Need To Remember: What works for the Glock does not work for the Kel-Tec, and vice-versa; the Austrian Army would have never accepted the use of .22 Magnum ammunition, even if it came with a larger magazine, while backcountry travelers counting every ounce might scorn the Glock’s weight. Each lightweight, high capacity handgun occupies fills its own niche, small or large.

The box magazine promised to to change things. The box magazine could be inserted into the pistol grip, with the cartridges sitting in a narrow vertical column. The Colt M1911 handgun could carry seven .45 ACP rounds in a magazine. That wasn’t appreciably better than a revolver, however. The solution? Stack ammunition in two vertical columns that merged at the top, allowing the same amount of ammunition to fit in the same space.

The use of polymers in handguns started in the late 1970s and was popularized with the Glock 17 handgun. The Glock’s frame and grip are made of plastic, while the barrel and slide are made from steel. This reduces weight appreciably. The weight reduction, coupled with a double stack magazine, allowed the Glock to boost its ammunition capacity to 17 rounds of nine millimeter parabellum ammunition.

Glock built a high capacity handgun, but one designed to be a service handgun for the Austrian Army. The Glock 17 balances weight versus ammunition capacity versus ammunition lethality in ways other handguns had not, gaming the system by using lightweight materials other handguns had not. The resulting handgun was a reliable, accurate handgun just 8.03 inches long. It packed seventeen rounds of nine millimeter Luger ammunition in a magazine well less than five inches long. The Glock weighs just 25.02 ounces unloaded and 32.12 ounces fully loaded.