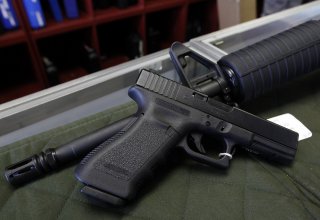 Here's What You Need To Remember: Gen5’s slew of small-but-thoughtful changes quickly add up to produce a more formidable Glock 22 that’s not only more accurate but offers better handling and improved durability.

Not terribly impactful by themselves, Gen5’s slew of small-but-thoughtful changes quickly add up to produce a more formidable Glock 22 that’s not only more accurate but offers better handling and improved durability. Nevertheless, the .40 S&W caliber’s popularity has declined precipitously in recent years; even the FBI, which originally commissioned the round, has stopped using it, returning instead to higher-capacity, softer-shooting, and more compact 9mm guns. Although too unwieldy for law enforcement, the 10-millimeter caliber has recently resurfaced as an increasingly popular option for consumers (especially some hunters) who want the stopping power and don’t mind the recoil.

This piece first appeared earlier in 2021 and is being reprinted due to reader interest.