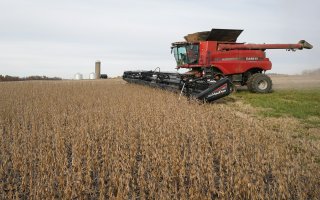 Since the signing of the U.S.-China trade deal in January, much media focus has been on China’s agreement to buy over $142 billion worth of U.S. manufactured, energy, and agriculture goods this year.

At this point in time, it is likely that China will fall short of its purchase agreement.

However, there is ample reason to anticipate that the purchases it will make in one category—agriculture—will be quite substantial before year’s end.

On Aug. 24, U.S. and Chinese officials discussed the progress of the deal. Among the topics is the fact that China must significantly increase its purchases of U.S. products to fulfill the agreement, according to a statement put out by the Office of the U.S. Trade Representative.

Looking at U.S. monthly exports to China from January through June, Chinese buyers to that point had managed to buy only 23% of the total goods needed to satisfy their commitments in the deal.

With only a few months remaining in the calendar year, China must buy 77%—over $100 billion worth—of its purchase commitments of U.S. manufactured, energy, and agriculture goods.

I estimate China will be able to make only about 60% of the necessary goods purchases by the end of the year.

Although it’s unlikely China will be able to significantly increase its purchases of manufactured and energy goods, we should expect U.S. agriculture exports to China to skyrocket in the months ahead.

As of June, China had imported only $6.5 billion of the $33.4 billion worth of agriculture it will have to buy this year. However, there are increasing reports of China’s buying much more U.S. agriculture than in past years. For example, recent reports reveal that Chinese buyers made record-breaking purchases of U.S. corn in July.

One reason to expect U.S. agriculture exports to China will continue to increase is a growing food crisis in China, causing that country to rely more on food imports such as pork and soybeans.

Even if the U.S.-China trade deal were to fall apart before the end of the year, China still would need to buy U.S. agriculture to feed its domestic demand.

Another reason we should expect U.S. agriculture exports to China to continue to increase through the rest of the year is “seasonality” and the method by which agriculture sales are reported.

Seasonality means that although the U.S. exports goods such as soybeans year-round, soybeans generally are harvested in September and October. And U.S. soybean exports to China generally peak in October and November.

In fact, one-third of annual U.S. soybean exports to China generally happen in October and November. On average, the U.S. exports about $11 billion worth of soybeans to China a year.

Chinese officials recently stated they expect the import of U.S. soybeans to increase.

U.S. officials have noted that, as far as the trade deal is concerned, they won’t be looking only at monthly exports but the weekly “sales” of U.S. agriculture as well. Sales refers to goods that have been purchased but not yet exported.

As of Aug. 20, U.S. farmers had made 18.4 million metric tons of soybean sales to China this year—a value of roughly $6.8 billion. This number is likely to keep going up.

For the past five months, China has bought an average of 811,000 metric tons of soybeans a week.

In the past, however, it wasn’t uncommon for China to buy between 1 and 2 million metric tons of soybeans a week between September and December, and we can assume China will buy at least this much, if not more, in the next three months.

With 18 weeks left in the year, if China buys 1.5 million metric tons a week, at an average price of $370 a metric ton, that’s almost $10 billion in sales. That would bring U.S. soybean sales to China to $16.8 billion for the year, and just over half the $33.4 billion needed for the agriculture purchases part of the trade deal.

While it is unlikely that China will fulfill its side of the U.S.-China trade agreement, it is very likely that its purchase of U.S. agriculture will be much greater than in past years. And that is nothing to sneeze at.

Riley Walters is a policy analyst in the Davis Institute for National Security and Foreign Policy at The Heritage Foundation.

This article first appeared at The Daily Signal on September 1.