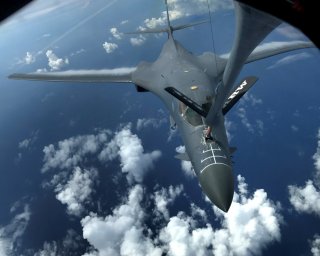 Here's What You Need To Remember: The RQ-180 first flew in 2010, Aviation Week reported, finally allowing the Air Force to penetrate enemy air defenses with a far-flying reconnaissance craft. The service last possessed that capability in the late 1990s in the form of the Mach-three SR-71 manned recon plane.

The U.S. Air Force’s secret stealth reconnaissance drone has been operational since 2017. Now the flying branch is setting up a forward base in Guam in order to support the radar-evading drone on missions over the Pacific region.

The Air Force has never officially acknowledged the existence of the Northrop Grumman-made RQ-180 drone. Trade publication Aviation Week in 2013 broke the news of the drone’s development. The magazine on Oct. 24, 2019 followed up with an in-depth feature tracking the unit changes that could support a fleet of seven RQ-180s.

“There is a growing body of evidence that the stealthy vehicle is now fully operational with the U.S. Air Force in a penetrating intelligence, surveillance and reconnaissance role,” Aviation Week reporter Guy Norris wrote.

The flying-wing RQ-180 reportedly is similar in shape to the Northrop-designed B-2. The unmanned aircraft is smaller than the manned bomber is, however, and also features design improvements that Northrop also is including on the new B-21 bomber that the company is building for the Air Force.

The RQ-180 first flew in 2010, Aviation Week reported, finally allowing the Air Force to penetrate enemy air defenses with a far-flying reconnaissance craft. The service last possessed that capability in the late 1990s in the form of the Mach-three SR-71 manned recon plane.

The Air Force reportedly tested the roughly 170-feet-wingspan RQ-180 at Groom Lake, part of the Area 51 complex in Nevada. “In 2009, with Northrop well underway on low-rate initial production of the RQ-180, the Air Force began preparations to evaluate the new vehicle and established a flight-test organization at Groom Lake dubbed the ‘Mad Hatters,’” Norris wrote.

New information given to Aviation Week now points to 2010 as the key year for the program. First flight of the prototype air vehicle at Groom Lake, known as V1, was believed to have taken place on Aug. 3, 2010. Circumstantial evidence that supported the buildup of pre-first-flight test activity included frequent flights to the site  by Northrop Grumman-owned Beech 1900D logistics aircraft, one of which was seen parked by the large Southend hangar in a May 2010 satellite image.

The first prototype, V1, had been in flight testing for more than 14 months when a second vehicle, V2, is thought to have joined the test campaign in November 2011. Three more test and development aircraft are also suspected of following the first vehicles into flight trials over the next 15 months, with first flights believed to have occurred in November 2012 (V3), July 2013 (V4) and February 2014 (V5).

Testing of the stealth drone transferred to Edwards Air Force Base in California. “Activity in the program stepped up through the remainder of the year, with the first flight of V6 believed to have taken place in September 2014,” Norris explained. “In late 2014 and early 2015, a unit described as Detachment 2 of the 15th Test Flight was stood up at Edwards AFB, likely marking another key phase for acceleration of the new UAS capability toward front-line operational service.” The seventh and apparently final production RQ-180 first flew in November 2015, according to Norris.

Eight months later, the system took another step toward its operational debut when Detachment 2 of the 9th Operations Group was established at Edwards South Base. ...

Following the establishment of Detachment 2 in 2016, preparations for initial operations entered the final phases and are believed to have culminated in a secret long-range graduation test mission from Edwards sometime in early 2017. No details of the flight, thought to have been code-named Project Magellan, have been acknowledged, but the mission is thought to have focused on validating the performance of the autonomous navigation system at extremely high latitudes—possibly as high as the Geographic North Pole.

By 2017 the RQ-180 was ready for initial deployment. To support the drone’s long-distance missions, the 9th Operations Group stood up two new detachments. Detachment 3 is at Beale Air Force Base in California, while Detachment 4 is at Andersen Air Force Base on the Pacific territory of Guam.

Andersen is the Air Force’s main hub for large aircraft operations over the Western Pacific, and would play a major role in a military confrontation with China.