Grand Strategy Bombing: How the B-1 Will Lead American Defense 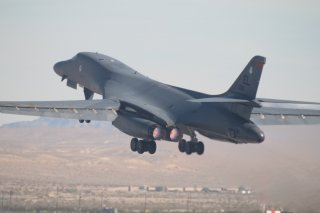 Here's What You Need to Know: As the United States, Air Force has shifted the primary defense focus to prepare for future potential conflict against peer threats.

Today there are sixty-two B-1B Lancer bombers in service, and while the aircraft are expected to be replaced by the Northrop Grumman B-21 Raider beginning in 2025, there have been continuing efforts to update and upgrade the aging warbird.

As the United States, Air Force has shifted the primary defense focus to prepare for future potential conflict against peer threats, which is in alignment with the 2018 National Defense Strategy (NDS), earlier this year the Air Force Global Strike Command (AFGSC) began to address the new Bomber Task Force (BTF) structure.

The B-1B will continue to play a critical role. When it was developed in the 1960s, the Rockwell B-1 Lancer was meant to replace both the B-52 Stratofortress and the B-58 Hustler by combining the speed of the former aircraft with the range and payload of the latter. However, the high cost of the B-1 led to the program being canceled in 1977. However, it was restarted in 1981 and the B-1B variant proved ideal for the changing world.

Originally designed strictly for nuclear war, the B-1 underwent a $3 billion conventional refit, and was used in combat operations in Iraq during Operation Desert Fox in December 1998, and later in Operation Allied Force in Kosovo. The B-1B was used throughout Operation Enduring Freedom in Afghanistan and Operation Iraqi Freedom.

Now with a changing threat on the global stage, the B-1B will again adapt to the tasks required of it. AFGSC has prioritized adjusting locations and the way that bombers deploy to better train and prepare for the future landscape of warfare.

This has included a BTF mission that can provide airmen the opportunity to conduct joint-training with U.S. allies and partners.

“U.S. Strategic Command units regularly conduct training with, and in, support of all Geographic Combatant Commands. In our case, this takes the form of Bomber Task Force missions which provide our Strikers opportunities to integrate with allies and partners and to become familiar with multiple forward areas of operation,” said Gen. Tim Ray, AFGSC and Air Forces Strategic-Air commander. “All of this feeds into a larger effort to assure allies and partners, and to help maintain global stability and security.”

In May 2020, some 200 airmen from the 7th Bomb Wing deployed to Andersen Air Force Base, Guam, for the first BTF in the Indo-Pacific area of responsibility. While there, the airmen conducted approximately 385 flight hours and executed over thirty training missions; twelve of which were higher-headquarters directed, historically completing 100 percent of the assigned missions.

The B-1B bombers were deployed to Guam just a month after the Air Force sent five B-52H bombers back to their home station at Minot Air Force Base, North Dakota. That essentially ended the Continuous Bomber Presence Mission, which had seen a rotation of B-51, B-1B and B-2A Spirits for half-year stints on the island, which is located just 1,800 miles east of China.

Instead, the BTF has taken on less predictable global deployments.

“BTF missions are routine demonstrations of the credibility of our forces to address a diverse and uncertain security environment, and particularly AFGSC’s ability to deliver lethal, long-range strike options across the globe anytime, anywhere,” Ray said.

Now, the 9th Expeditionary Bomb Squadron and 7th BW Airmen have again returned to Andersen AFB to participate in another BTF, which will help support a free and open Indo-Pacific region while also testing and redefining B-1B Lancer capabilities.

“Our first BTF in May proved the concept that B-1s could quickly deploy and operate halfway across the globe,” said Lt. Col. Ryan Stallsworth, 9th EBS commander. “Now, reflecting on Dyess and Ellsworth’s last three successful B-1 BTF’s to the Indo-Pacific region, we have shown that the B-1B is back in business; providing combatant commanders with consistent airpower, desired effects and, ultimately, options. This is a clear and strong deterrent message to our adversaries and a reassuring message to our steadfast allies and partners.”

“The B-1B community has a proven history of lethality from the Cold War to the war on terrorism, and now we are proving ourselves once again at the tactical and strategic levels with the next phase of global operations – Bomber Task Force,” added Stallsworth. “While the last year has been dynamic and turbulent, the entire B-1B crew force and supporting agencies are excited about conducting BTFs around the world.”