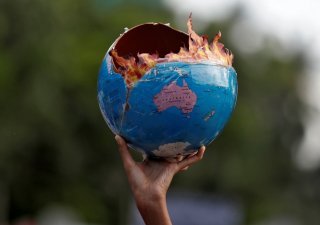 Here's What You Need To Remember: The better approach is to break down climate and environmental challenges into important, meaningful and manageable issues. Engage them all on their own terms

This blue dot in space is the only planet we have. We must take care of it. Like any other great challenge, this demands a seriousness of effort paired with the honesty and courage to insist on practical, realistic, efficacious policies.

The planet doesn’t know we have national borders. We do. It’s a reality that can’t be ignored and won’t change. The idea of erasing the freedoms of peoples and the sovereignty of nations to address environmental issues is unrealistic and unnecessary. Nations will cooperate and compete, just like in any other matter of international affairs.

Rather than thinking about environmental issues as a global crusade or an existential crisis that trumps every concern and national interest, climate and related challenges can be dealt with most effectively by treating it like the foreign policy problem it is. For the United States to truly lead on environmental issues, Washington must have the resolve to deliver real outcomes—solutions that come from realistic foreign policies, sound economic decisions, and unshakeable respect for human freedom.

Climate change is happening. Human activity may well play a role. There are other arguably more pressing environmental issues as well. Air pollution, particularly in developing countries, is hazardous to human health. A scarcity of fresh water affects every continent. Where property rights are not clearly defined and protected, excessive exploitation of fisheries and other natural resources remains a problem in many regions around the world. Millions of tons of plastic are dumped in the ocean every year. Let’s all agree these are real concerns. We ought to have sound policies to address them. It’s important for the welfare of Americans and has real consequences for U.S. foreign policy. And we can’t lose sight of the fact that generating higher levels of prosperity is a top priority for most humans around the globe—and that includes getting access to affordable, reliable power.

In a 50/50 nation divided on many issues, making progress on protecting our environment remains problematic. We have to depoliticize the conversation. Americans share a common commitment to the general welfare. We all want to protect our environment and safeguard our livelihoods. Yet, we remain deeply splintered on how to move forward.

We are stuck in neutral because there is an undeniable effort to use climate change to drive a far broader agenda for radical political change. Perhaps the best example of this effort is the Green New Deal, a blueprint for expanding government’s control over the economy and driving social change. Clothing costly, ineffective climate policies in divisive politics ensures that many Americans will both remain skeptical and actively resist open-ended agendas. Rather than build momentum for action, such a ham-fisted, aggressive approach makes for partisan gridlock and inaction.

Likewise, deliberately inflammatory rhetoric only adds to concerns of fear mongering and manipulation by climate activists. A May 2019 article in the Guardian offers a case point. “Why the Guardian is Changing the Language It Uses About the Environment” has been referenced by several mainstream sources. The publication updated its official style guide, changing how it uses the term ‘climate change’:

There is little basis for these editorial tweaks, which actively preempt honest debate and understanding with pointed advocacy bordering on propaganda. While the claims are that strong language is essential for “meaningful action,” the opposite is true. Using hyper-partisan language and dismissing debate and counterclaims breeds distrust, suspicion, and opposition. Climate change, by the very nature of the issue, is never going away. The climate is always going to change. Calling it a climate crisis empowers political opportunists to employ a “never let a crises go to waste” strategy indefinitely.

The better approach is to break down climate and environmental challenges into important, meaningful and manageable issues. Engage them all on their own terms. There are top tier challenges that, if effectively addressed, would go a long way toward assuring that we keep our blue dot hospitable for humanity.

Task #1: Recognize China Is the Environment’s Enemy. There is no national policy or multinational effort to deal effectively with the world’s worst, most aggressive and unrepentant polluter. In fact, the Chinese Communist Party views environmental exploitation as just another tool to advance the regime’s global power authority. Any agenda for environmental action that does not put China’s malignant behavior front and center and deal equitably with it is not serious about the health of our planet.

At a recent meeting of the UN General Assembly, Chinese President Xi Jinping proclaimed that his country was leading the world in responding to climate concerns and protecting the planet. No claim could be more disingenuous. China is the world’s dirtiest country. It spews more greenhouse gases than any other nation and is a leading air polluter. Most of the 1.3 billion tons of plastics that are dumped into the ocean each year come from China. Many of the freshwater scarcity challenges in Asia are linked back to Chinese mismanagement, the Mekong River Delta being a prime example. Chinese fleets are decimating the fishing reserves of other nations. Meanwhile, China makes a concerted effort to manage international institutions and shape international agreements (such as the Paris Climate Accord) to nakedly advance Beijing’s interests.

China’s poor environmental record shouldn’t be a surprise. Historically, top-down, centrally managed economies have been terrible for the environment. As Walter Russell Mead recently wrote in the Wall Street Journal:

China’s pollution problem results from the intersection of three forces: the rapid rise of its manufacturing economy; a central leadership that has long favored economic growth over competing policy goals like reducing pollution; and a system of governance that creates perverse incentives for local officials and limits the ability of local residents to control decisions that affect their lives.

China’s bad environmental behavior can be curbed only in the context of an overall strategy. To deal successfully with China, the United States must rely on its own unique strengths, while remaining committed to the principles of economic and political freedom. The United States must also engage all its levers of power, including its strong global presence and partnerships, economic engagement, and clear power projection on the world stage. Anything less won’t compel Beijing to act differently.

Certainly, entertaining its pro-environment propaganda while setting standards that serve only to facilitate the CCP narrative will never succeed. Meanwhile, the leverage the CCP gains through the illusion of cooperation will only hamstring the United States and its allies from doing what is necessary in other areas.

Task #2: Embrace a Market-Driven Green Industrial Revolution. Left and Right agree that technology can be a powerful tool for building a better world. Why wouldn’t we all want a new generation of technology that delivers high productivity, greater efficiency, and better environmental outcomes? The centrally-directed government will not deliver on that agenda. In fact, government intervention often stymies innovation and misallocates public and private dollars, meaning economically and environmentally promising technologies may get left behind.

Technological change and innovation on a grand scale is not deterministic. Free nations disadvantage themselves when they compromise on the advantages provided by a free society. Empowering politicians to pick winners and losers in economic competition is as likely to lead to widespread corruption, inefficiencies and corporatism as it is to produce optimal economic and environmental outcomes.

That is not to say that there is no role for government, but that role should be limited to legitimate matters of governance—protecting the rule of law and providing security, not to supplant market choices. A number of initiatives taken by the Trump administration were highly beneficial to facilitating market responses, good governance, and the environment. For example, the United States championed the Blue Dot Network, the Clean Network, and the Three Seas Initiative. All facilitate global partnerships for improving infrastructure and the energy sector. These should serve as model steps for coordinating international responses to shared environmental concerns.

Task #3: Recognize that Not All Environmental Concerns Are Matters of National Security. While there may be overlap on occasion, these are fundamentally different kinds of public policy issues. National security challenges are about protecting U.S. vital interests from adversarial competitors. Environmental policies are based on weighing costs and benefits in activities that impact the public commons and selecting the policies that achieve the optimum outcomes.