Great Wall In Reverse: To Take Down China, Look To The Pacific's Many Islands 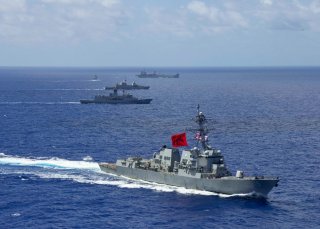 Here's What You Need To Remember: Message to Beijing: you can try to deny U.S. and allied forces access to the Western Pacific or the freedom to move around within the theater, but you will see your access and freedom of movement curtailed if you do.

It’s always gratifying to see your ideas take wing. Back in 2012, on a lark, Toshi Yoshihara and I broached a strategic concept we took to calling “island-chain defense,” or sometimes a “Great Wall in reverse.” Long story short, the conceit behind island-chain defense is that the United States can mold geography, land, air, and sea power, and adroit alliance management into a formidable barrier to Chinese maritime movement. Fortifying the “first island chain” that runs parallel to the mainland coastline would discourage aggression by convincing the Chinese Communist leadership aggression cannot pay.

Message to Beijing: you can try to deny U.S. and allied forces access to the Western Pacific or the freedom to move around within the theater, but you will see your access and freedom of movement curtailed if you do. Strewing missiles of various kinds along the island chain while deploying manned and unmanned aircraft and ships of war nearby would seal up the straits through which surface and air traffic must pass to reach the broad Pacific. No People’s Liberation Army (PLA) commander would relish running such a gauntlet.

Since then Toshi and I have touched on the idea jointly from time to time. I returned to it in a solo effort in 2014 and have elaborated on it periodically when circumstances warrant or the mood strikes. Ultimately, though, sound ideas have to be transmuted into working operational concepts and plans. Island-chain defenders need the implements to put concept into practice, and that means defense budgeteers must embrace this approach and furnish the necessary resources.

All hail, then, to the Center for Strategic and Budgetary Assessments (CSBA) for taking up the baton and running with it. In recent weeks this Washington, DC-based think tank published a novella-length study titled Tightening the Chain: Implementing a Strategy of Maritime Pressure in the Western Pacific. The CSBA team starts making the idea concrete, estimating which implements the U.S. armed forces must add to their arsenal to execute such a strategy, how much the new hardware will cost, how it will be deployed to make the island chain into a barricade, and what responses the strategy may summon forth from the red team in China. Acquainting oneself with the strategic surroundings, the contenders, and their options is the beginning of wisdom. Read the whole thing.

Now, branding is part of Tightening the Chain. That’s part of life in that strange land known as Washington, DC. Everyone pushing some big idea or program strives to coin a memorable catchphrase for it—much as Madison Avenue types try to devise advertising jingles that lodge in your cranium, regardless of whether you want them there or not. Coax people into using your vocabulary to discuss some subject and you prime them to reach the conclusions you desire. Wordplay represents an inescapable if lamentable part of the policy and strategic landscape.

That being the case, the CSBA coauthors brand their concept an “Inside-Out” strategy aimed at bringing “maritime pressure” on Beijing—pressure meant to deter the leadership from mischief. “Inside-Out” is nothing more than a cutesy way of indicating that forces will deploy along the island chain to encumber PLA movement from the China seas eastward or southward through the narrow seas that pierce the island chain. That’s the forward barrier, the scheme’s interior component. Meanwhile heavy surface forces will ply the open waters beyond the island chain, acting as a mobile reserve force. Destroyers, cruisers, and frigates will surge to points where PLA forces attempt to break out. They will seal any breaches in the frontier—keeping hostile forces penned within the China seas. That’s the exterior component.

The coauthors liken their strategic logic to football. And indeed, football coaches do array lines against each other. One line may be dubbed defensive, but in reality it serves both defensive and offensive purposes. Think about it. Hulking linemen mount a forward, theoretically impassable defense to prevent the offense from marching downfield. Linebackers and safeties patrol the backfield, operating freely in space in case the offense manages to punch a runner through the line on the ground or the quarterback heaves a pass over the line. That’s the defensive element. But blitzing defenders also try to break into the offensive backfield. If successful they could force a turnover—handing the ball over to their offense or even scoring a defensive touchdown. Defense, offense.

So it is on the gridiron; so it is on maritime battlegrounds. Inside-Out is a form of classic perimeter defense transposed into a saltwater setting and updated with ultramodern military technology. Perimeter defense is really, really hard under normal circumstances. It requires the defenders to disperse combat power, trying to make themselves stronger than the enemy at every point along what, after all, is a series of infinitely many such points. That’s what a line is. Dispersing power attenuates it. Oftentimes, consequently, even an outmatched opponent can group the bulk of its power at some point along the line and puncture it. This is why army commanders try to conscript terrain—mountains, defiles, shorelines—to keep their defensive frontiers as short as possible.

Defensive walls are different than lines of troops, and easier to guard—to a point. A wall constitutes a solid perimeter. Generally speaking, stretches of masonry connect sentry towers. But neither commanders nor military engineers ever deluded themselves that even the most stoutly built wall is impenetrable. In fact, the design philosophy underlying military architecture assumes precisely that breaches will occur. An edifice’s job is to limit and channel breakthroughs to a few, manageable spots rather than stop them altogether. Commanders position mobile forces behind the wall and rush them to points of impact to shore up the defense. Inside-Out strategy, anyone?

Some walls are mainly defensive in outlook. Imposing as it is, the Great Wall is such a structure, built to stymie nomads raiding against China’s northwestern frontiers from the Central Asian steppes. A few defense perimeters really are impenetrable. In the late 1950s, as fighting raged during the French Algerian War, a militant army broke itself against the French Army’s “Morice Line,” a high-tech frontier strung along the border separating embattled Algeria from neighboring Morocco and Tunisia. Still other walls provide platforms for offensive operations alongside their defensive function. The Roman Empire’s Hadrian’s Wall was such a platform. That edifice, reaching across the narrow neck of the island of Britain, allowed the legions to range forward into the badlands known today as Scotland and retire to a secure refuge when need be.

Clearly, then, surveying history and sporting lore pays dividends when compiling operational plans, drawing up budgets, and procuring sensors and armaments for the Western Pacific. A few noteworthy items from the CSBA report. First, Inside-Out defense is a joint concept bringing together seagoing, air, and ground forces—not a strictly naval concept. It is no accident that the report’s cover page displays a truck-launched anti-ship missile battery; this is an apt emblem for the approach. To firm up the sections of “wall” joining the fixed “sentinel towers,” or islands, what better than shore-based armaments? They are affordable in bulk, and tough to detect and root out. In short, land-based sea power constitutes the ideal mechanism for confining PLA forces to home waters.

Second, the approach is a “combined” concept, harnessing not just air, ground, and land forces but contributions from allies and friendly powers ringing the East Asian periphery. For one thing, no Inside-Out strategy can accomplish much without access to the islands that make up that interior defense perimeter. That’s allied turf. For another, allies such as Japan boast their own capabilities for levying maritime pressure. The Japan Self-Defense Forces pioneered land-based, mobile anti-ship weaponry, fielding working systems before island-chain defense was much more than a gleam in the eye of American maritime strategists. Furthermore, the Japan Maritime Self-Defense Force boasts a contingent of diesel-electric submarines optimal for lurking in or around the straits, along with fleet-of-foot surface craft to lend their firepower to interior defense. America’s roll call of allies and friends in Asia is an impressive one.

And third, an Inside-Out defense appears affordable. The CSBA team estimates that Congress and the Pentagon could enact all of the report’s recommendations for $8-13 billion over the next five years. If so, that’s a bargain-basement price for capabilities that could deter aggression—and keep the peace in the Western Pacific. The United States is the steward of the status quo in the world’s oceans and seas. When nothing happens, that’s a good thing; it means the status quo holds. Maritime pressure promises stewardship on the cheap.

James Holmes is J. C. Wylie Chair of Maritime Strategy at the Naval War College and coauthor of Red Star over the Pacific. The views voiced here are his alone. This article first appeared last year.