Green Beret Sharpshooters Can Kill You From Over Two Miles Away 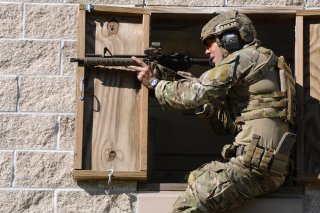 Key Point: The Green Berets have a more practical skillset than long-distance deadliness, too.

A two-man Green Beret sniper team emerged victorious at the elite U.S. Army Special Operations Command International Sniper Competition at the end of March 2018 distinguishing themselves as among the most lethal sharpshooters in the special operations community.

Master Sgt. David and Sgt. 1st Class Cuong from the 1st Special Forces Group (Airborne), whose full names were withheld by officials given the sensitive nature of their assignment, bested dozens of snipers in the 22 events spread over five days of grueling precision fire challenges — even after a rocky start.

“We started off poorly on the first day due to some sleep deprivation,” Master Sgt. David said in an Army release. “We really started clicking and things began to fall into place after we regrouped and got some rest between events.”

More than 40 sniper and special operations forces teams from across the U.S. armed forces — including the Army Sniper School, Marine Corps Scout Sniper School, and Naval Special Warfare Command — and foreign militaries from France to Singapore turned out at Fort Bragg, North Carolina for the illustrious shoot-off hosted by the 1st Special Warfare Training Group (Airborne).

“It is the level of competitors, the cadre, and the competition that make this event so unique,” Master Sgt. David added. “At this level, all of these guys are the best of the best.”

Now, we love to read stories of superhuman snipers taking out a dozen ISIS commanders with one bullet from two miles away, but the USASOC sniper competition is less about jaw-dropping sharpshooter feats and more about teamwork, communication, and focus under pressure — skills that actually matter when you’re downrange. Here’s a vignette from this year’s competition from Fayetteville Observer military editor Drew Brooks:

At Range 67, snipers raced against the clock as they moved from one firing point to the next, engaging a series of 12-inch by 16-inch targets that were up to 600 meters away.

At Range 62B, their communications skills were further tested. Twenty targets were mixed amid a range that includes numerous obstacles, buildings and mock vehicles. Each was marked by a symbol and a color denoting the type of weapon that should be used — pistol, carbine or sniper rifle.

Working together, the competitors had to look at a card shown to them by an instructor, find that symbol and shoot the target with the appropriate weapon.

“It’s essentially ‘Where’s Waldo,’” said a Special Forces Sniper Course instructor overseeing the event. “It’s designed to suck them in, get them distracted or moving faster than [they] needed to be.”

I may be a sloppy civilian, but I’d much rather have a sniper team that’s flexible and versatile (and can ruck hard between positions, the focus of Range 42’s required 90-pound kettlebell according to the Fayetteville Observer) than a one-shot, one-trick pony.

Image: A Green Beret soldier fires a rifle during a stress shoot competition on Eglin Air Force Base, Fla., Oct. 15, 2015. He is assigned to the 7th Special Forces Group. The competition tests the Special Forces soldier's ability to navigate terrain and obstacles while engaging targets accurately despite an elevated heart rate and rapid breathing. U.S. Army photo by Staff Sgt. William Waller