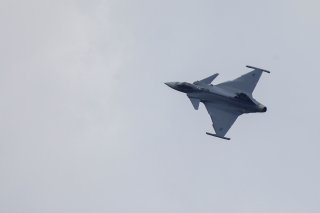 Here's What You Need To Remember: The Swedish jet is impressive in itself, but all the more so because of the armament that comes with it; it has an onboard MBDA Meteor guided air-to-air missile that can travel at Mach 4.

Defense commentary is, and always has been, notoriously difficult to disentangle from national politics.

The urge to establish one’s martial prowess over one’s adversaries took many different forms in the pre-modern period, from references to fighting spirit and superior force of will to invocations of divine favor.

But in the centuries following the tremendous technological progress of the industrial revolution, a new paradigm has taken hold: “the enemy will crumble before our superior military hardware.”

From Chinese media claiming that Taiwan’s F-16 fleet is “no match” for the J-11 to Russian media claiming that the S-400 will ”send the F-35 to its grave,” it has become a well-established tradition for defense outlets to speak up their nation’s weapons while deriding those of rival powers.

So, when one of Russia’s foremost defense outlets--Voennoe Obozrenie--published a comparison piece between Su-30/Su-35 and Sweden’s Gripen NG fighter by Russian defense writer Evgeny Damantsev, the expectation was clear. The reality, however, is as refreshing as it is surprising.

Damantsev’s iconoclastic intent is readily apparent from the article’s headline: “Gripen-NG harmless for Su-30 and Su-35? Take off the rose-colored glasses!” The author is reacting to a recent statement by commander-in-chief of the Swedish Air Force, Major General Matts Helgesson, that the JAS-39E/F--also known as Gripen-NG--was “made to destroy” the Su-30SM and Su-35.

“Extremely unprofessional” and “self-aggrandizing” as Helgesson's comments are, Damantsev warns that it would be premature to dismiss them as pure bluster. He notes that his colleagues, guided by “patriotic sentiment” and made complacent by the Su-30/Su-35’s superior numbers, hastily concluded that the latest Gripen variants “pose no real threat” to Russia’s air force. This conclusion, however, relies on what is only a surface-level overview of Gripen-NG’s specifications sheet. That is, it fails to consider how Gripen-NG’s avionics, electronic countermeasures (ECM) and armaments are designed to work in tandem for the express purpose of countering Russia’s current Sukhoi line.

Of particular concern is Gripen’s onboard MBDA Meteor ramjet-powered air-to-air missile, which is able to retain its Mach 4 speed even at a distance of up to 130-150 kilometers from its launch point. Though formidable in of itself, Damantsev argues that the Meteor missile is especially dangerous considering that it can be guided by, and receive tracking information from, a wide range of swedish ships, ground-based radar systems, and nearby aircraft through SAAB’s potent GlobalEye airborne early warning & control (AEW&C) system. Damantsev expresses concern that the Su-30SM and Su-35 currently lack the means to counter Gripen-NG’s offensive capabilities.

The RVV-AE-PD, a modernized, mach 5 ramjet variant of Russia’s R-77 medium-range air-to-air missile that should have been capable of engaging Meteor-equipped fighters, was widely teased in 1999 but never made it into serial production.

Damantsev concludes that the two Sukhoi fighters lag behind the Gripen-NG in key performance areas, and will continue to do so if the RVV-AE-PD project is not revived and completed with due haste.

Damantsev’s analysis was not only well-received by Voennoe Obozrenie’s readership (at least, judging by the 150+ comments on the article),  but exists as a necessary corrective to a defense commentary sphere that it is otherwise all too ready to downplay the capabilities of their adversaries while seeing their own--to borrow the author’s terminology--through rose-colored glasses. Nor is this an exclusively Russian phenomenon. To one degree or another, all great military powers must wrestle with the ongoing challenge of accurate threat perception.

Mark Episkopos is a frequent contributor to The National Interest and serves as research assistant at the Center for the National Interest. Mark is also a PhD student in History at American University. This article first appeared in June 2019.