The Gulf War Misadventures of the F-111 Aardvark 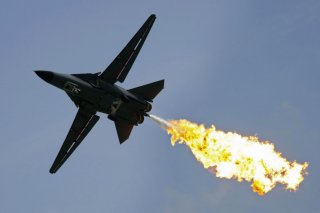 Here’s What You Need to Remember: The General Dynamics F-111 Aardvark was a low-altitude strike plane born out of a shotgun wedding between competing Air Force and Navy requirements—with Defense Secretary McNamara as the minister. Despite its troubled adolescence, it grew into a capable high-tech night bomber that lasted decades in service, noted for its sleekly elegant profile.

Newly appointed Defense Secretary Robert McNamara was convinced that a single aircraft could satisfy both requirements, thereby saving on development costs. The Army and Navy were less keen on compromising their visions but were forced to cooperate on the so-called TFX program. A contract was awarded to General Dynamics in 1962. Because the design was smaller than Air Force strategic bombers, and the service eschewed the “attack” designation used by the Navy, it was designated with an “F” for fighter.

The F-111’s designers adopted the new technology of variable-geometry, or “swing” wings. These permitted the wings to swing out during takeoff to generate maximum lift and then would tuck inward midflight to achieve higher speeds. The F-111 was the first of several major designs that used the technology.

A key innovation was the F-111’s revolutionary new terrain-following radar, which mapped the ground directly in front of the plane and then automatically adjusted the flight path to avoid a collision. This allowed F-111s to fly as low as two hundred feet above the surface and make precise adjustments at high speed without crashing—even when flying at night, or in bad weather conditions. The F-111’s talent for hunting in darkness, nose close to the ground, was what earned it the appellation “Aardvark.”

Early F-111s did show promise, capable of flying over the speed of sound at Mach 1.2 at low-altitude, or more than double that (Mach 2.5) at high altitude—all the while requiring only a 2,000-foot runway to land. It was the first tactical aircraft to cross from the United States to Europe without mid-air refueling.

The Air Force F-111s didn’t have an auspicious debut in combat. After a detachment of six F-111As was deployed to Vietnam in 1968, three of them crashed in just fifty-five missions, all of the accidents linked to defective wing stabilizers. The Air Force was forced to withdraw the F-111 and correct the flaw at a cost of $100 million.

It wasn’t until the Linebacker raids in 1972 that the F-Aardvark finally demonstrated its potential. Skimming beneath North Vietnam’s extensive radar network at night, F-111s blasted North Vietnamese airfields and air defense batteries, weakening the resistance to incoming B-52 raids. Aardvarks didn’t require the fighter escort, electronic warfare support, or midair refueling that other bombers required, and could operate in inclement weather. Only six F-111s were lost in combat over the course of 4,000 missions during the war, one of the lowest loss rates of the war.

The definitive F-111F sported engines with thirty-five percent more thrust, upgraded radar and a Pave Tack infrared targeting pod that allowed the crew to identify targets on the ground and hit them with precision-guided munitions.

The F-111 would return to the stage of world history in 1986 after the bombing of the La Belle nightclub perpetrated by Libyan agents in Berlin killed two U.S. servicemen. Reagan ordered an attack on Libyan dictator Muammar el-Qaddafi’s personal compound near Tripoli codenamed Operation El Dorado Canyon. It was an early attempt to assassinate a head of state by air attack.