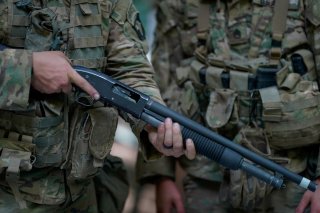 Here's What You Need to Remember: Thompson's semi-automatic shotgun's Blish Lock did little more than add mass to the bolt in a standard blowback action.

In May 1920, John T. Thompson — best known for his famous submachine gun — filed a patent protecting a semi-automatic, magazine-fed, double-barrel shotgun. But the weapon never got off the drawing board.

Traditional double-barrel guns had two different chokes. The choke controls the spread of the shot as it leaves the barrel, meaning that one barrel can produce a different shot pattern than the other barrel does.

Thompson sought to combine the flexibility of two barrels with the added firepower of a tube magazine, as found in other semi-automatic shotguns such as John Browning’s Auto-5.

The Browning semi-automatic shotgun’s magazine loaded through a port under the receiver. Spent shells ejected out of two ports at the top of the receiver. The ejection ports aligned at an angle with the bolt. The user cocked the weapon by pulling the cradle, which carried the bolt to the rear.

The shotgun featured two actuators connected to a covering slide that interfaced with the cradle inside, depending on which barrel it was aligned with.

Thompson’s shotgun had a single trigger. The shooter could select either barrel using a cradle shift lever. The gun featured a pivoting breech block system that was carried in a cradle.

As with his other rifle and submachine gun designs, Thompson again made use of John Blish’s so-called “Blish Lock” to lock the shotgun’s action “upon what is known as the Blish angle,” according to Thompson’s shotgun patent.

“This angle is such that the breech is held closed until the chamber pressure is reduced to a safe working limit when the residual pressure serves to open the breech,” the patent explained.

The efficacy of the Blish Lock is debatable. During testing of the Thompson Submachine Gun in 1921, the chief inspector of small arms at the Royal Small Arms Factory at Enfield in the United Kingdom noted that there was “an element of doubt as to whether the use of the lock is a positive one.”

The inspector believed that “that with pistol ammunition the inertia weight of the breech block and the resistance of its return spring afford sufficient resistance to hold up the cartridge [case] while the bullet leaves the barrel.”

Essentially, the Blish Lock did little more than add mass to the bolt in a standard blowback action.

However, it appears Thompson never actually built a single working example based on his design. Thompson’s company Auto Ordnance never offered the shotgun as part of its commercial lineup.