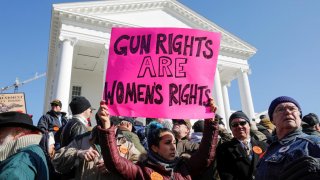 Chicago Mayor Lori Lightfoot recently blamed her city’s acute surge in gun violence on the lack of gun control laws in other states. As many commentators have pointed out, her assertions are factually incorrect to the point of absurdity.

These cards are required by law-abiding citizens before they can even possess a gun in Illinois. State law gives Illinois State Police up to 30 days to approve or deny applications, but the lawsuit alleges that it often takes far longer.

This is incredibly worrying. Not only are Illinois politicians wrongly blaming law-abiding gun owners in other states for uncontrolled violence in Chicago, but they don’t seem to realize that Illinois’ own barriers to lawful gun ownership make it harder for law-abiding residents to protect themselves.

And when given the opportunity, law-abiding citizens all over the country regularly use their firearms to defend themselves and others.

According to a 2013 report by the Centers for Disease Control and Prevention, almost every major study on the issue has found that Americans use their firearms in self-defense between 500,000 and 3 million times a year. There’s good reason to believe that most of these defensive gun uses aren’t reported to police, much less make the local or national news.

For this reason, The Daily Signal each month publishes an article highlighting some of the previous month’s many news stories on defensive gun use that you may have missed—or that might not have made it to the national spotlight in the first place. (Read accounts from 2019 and so far in 2020 here).

The examples below represent only a small portion of the news stories on defensive gun use that we found in July. You can explore more examples by using The Heritage Foundation’s interactive Defensive Gun Use Database.

The Illinois lawsuit is still in the early stages, but it represents a fight of fundamental constitutional importance. Law-abiding Illinois residents, like all Americans, have a constitutional right to keep and bear arms. This right takes on an increased importance during times of national instability, when a pandemic and widespread rioting have already stretched police resources to the breaking point.

Instead of demanding that other states make it harder for law-abiding Americans to defend their inalienable rights against criminals, Illinois should focus on removing administrative delays to lawful gun ownership. As the stories above prove, the lives and livelihoods of too many Americans depend on it.

This article by Amy Swearer first appeared in The Daily Signal on August 10, 2020.