Had the Cold War Turned Hot U.S. Aircraft Carriers Had a Plan 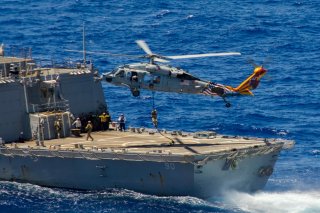 Key point: The Nimitz-class carriers are a monumental achievement—an enormous, highly complex, and yet highly successful ship design. The ships will carry on the Nimitz name through the 2050s, with the entire class serving a whopping eighty consecutive years.

The most successful U.S. Navy carriers of the postwar era all belong to a class named in honor of World War II’s most successful admiral, Chester W. Nimitz. The class’s lead ship, commissioned in 1975, bears the fleet admiral’s name. The Nimitz-class aircraft carriers were, at the time, the largest warships ever constructed. Although superseded by the new Ford-class, the ten Nimitz carriers will continue to form the bulk of the Navy’s carrier force for the next twenty to thirty years. Many projects a half a century or more.

The Nimitz-class carriers are a monumental achievement—an enormous, highly complex, and yet highly successful ship design. The ships will carry on the Nimitz name through the 2050s, with the entire class serving a whopping eighty consecutive years. That sort of performance—and longevity—is only possible with a highly professional, competent Navy and shipbuilding team.

Kyle Mizokami is a defense and national-security writer based in San Francisco who has appeared in the Diplomat, Foreign Policy, War is Boring and the Daily Beast. In 2009, he cofounded the defense and security blog Japan Security Watch. You can follow him on Twitter: @KyleMizokami. This first appeared in January 2019.