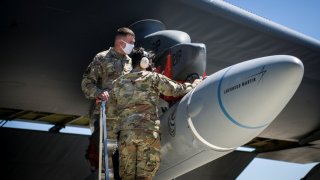 Here's What You Need to Remember: The Pentagon is fast making progress with newer kinds of space-based sensors and kill vehicles able to better discern, track and intercept threats, including hypersonic attacks bouncing off the boundary of the earth’s atmosphere.

The Pentagon hopes to fast-track and further accelerate technologies able to track and destroy attacking hypersonic weapons, in light of the troubling reality that both China and Russia currently have advanced hypersonic missiles at mature stages of development.

Interestingly, VanHerk made the point that hypersonic defenses can be advanced with a large amount of existing technology, meaning years of development may not be needed to advance new levels of defenses.

“Defense from hypersonics doesn’t require new technology, he said. It can be done with the technology at hand,” VanHerk added.

How might hypersonic weapons be defended? There are a variety of interesting prospects already under development, many of which might show promise in the near term. They pertain to the prospect of using highly advanced interceptors, lasers, high-speed drones, new levels of space-based radar, and other yet-to-be-developed systems.

The Air Force’s next-generation Spaced Based Infrared Sensors, called Overhead Persistent Infrared, are expected to bring new levels of sensor technology to space-based threat detection. The emerging concept is to not only detect the heat signature of an enemy missile launch but also help establish a continuous “track” of an approaching threat potentially moving at much faster speeds in the coming years.  Instead of segmented or geographically separated radar sensor windows, the current technical effort is grounded in new attempts to quickly and seamlessly share and integrate threat information. An ability to avoid radar “hand-offs” and sustain a steadily threat track on a super-fast moving hypersonic weapon might offer new avenues through which to defend against missiles traveling at five times the speed of sound.

VanHerk’s remarks seem to align with this notion of establishing an ability to track “all stages” of hypersonic flight, a technical ability likely to greatly multiply opportunities to track attacking hypersonic weapons.

“An effective defense must include pre-launch awareness, as well as an effective tracking of all stages from launch to impact,” VanHerk said.

What about the possibility of faster-moving, more high-tech interceptors? Much work on propulsion and sensing is already going on, and while an existing Ground-Based Interceptor might not be fast or effective enough against hypersonics, there are other emerging technologies that might be able to do this.  For example, industry leaders such as Booz Allen Hamilton are working with DoD on exploring technologies for space-operating laser weapons. The atmosphere in space is highly conducive to laser operations, and the Pentagon’s Missile Defense Agency is already working on “power scaling” technologies to refine an ability to use lasers for missile defense.

Also, the Pentagon is fast making progress with newer kinds of space-based sensors and kill vehicles able to better discern, track and intercept threats, including hypersonic attacks bouncing off the boundary of the earth’s atmosphere.