Has America's Social Safety Net Succeeded During the Pandemic? 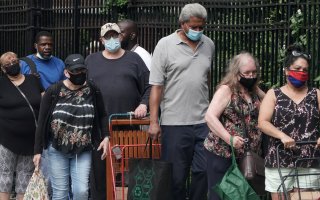 The American Enterprise Institute commissioned NORC at the University of Chicago to field a survey of 3,518 working-age adults in late July 2020 to learn more about the employment situation of US households and the reach of the social safety net. The results suggest the public and private safety net helped many American households cope as they lost jobs and fell into financial hardships in the immediate aftermath of the pandemic. At the same time, survey results show that just over half of working-age adults in late July 2020 believed the federal government should spend more on assistance, while also expressing concerns about dependency.

By late July/early August 2020, almost 60 percent of working-age adults reported at least one negative employment disruption since the start of the pandemic — such as losing a job, being furloughed, or losing work hours. Working-age adults from low-income households (according to pre-pandemic income), reported the highest rates of work disruption.

Not all of these households experienced sustained employment disruptions, however. By late July 2020, more than half (55 percent) of working-age adults with a separated worker in their household said a former employer had asked someone in their household to return to work (a percentage that is likely higher now), and the vast majority who were asked returned to work. Nonetheless, one in 10 working-age adults were still unemployed or furloughed at the time of the survey — signaling persistent problems with the job market.

Many of those who experienced a negative work disruption were receiving government and private assistance when we surveyed them. More than half (57 percent) of those who were unemployed or furloughed at the time of the survey said their household received unemployment compensation, SNAP, or assistance from a food pantry during the past seven days. This number increased to two-thirds when we included those who received private sources of help in the past 30 days.

We also found that safety-net benefits targeted households with employment disruptions very well. Only a small share (7 percent) of working-age adults without a negative employment action in their household received any government or private help in the last week.

Households with children were even more likely to receive help from programs such as SNAP, and they exclusively received assistance from Pandemic EBT and home-delivered or pick-up school meals.

A notable share of working-age adults still reported pandemic-related hardships, such as cutting back on food or non-food essentials, or using savings to cover expenses. The differences in reported hardships were small between those with and without children, but gaps emerged across pre-pandemic income levels.

Although government assistance and private support had a wide reach, a slight majority of working-age adults supported even more help from the federal government. Among those without children at home, just over half supported more federal spending to help people who lost jobs, low-income people, and working parents, while a minority felt the federal government has spent too much. At 58 percent, parents were especially likely to support additional spending for working families.

Still, a slight majority of respondents were concerned about people becoming dependent on government assistance during the pandemic, and even more so in general. Working-age adults across income groups shared these views, as did parents and non-parents alike.

As the pandemic continues and policymakers debate additional support measures, they face divergent public views on government support. Half of working-age adults want more federal spending, but the other half either believe the government has spent the right amount or too much. Policymakers should take comfort, however, in knowing our country’s safety net successfully targeted the most vulnerable households, and many received federal support as their households faced employment disruptions in the aftermath of the pandemic.