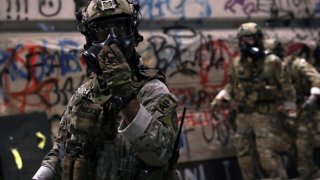 Unidentified, camouflage‐​wearing federal agents carrying military‐​style equipment have been caught on video abducting people in Portland, Oregon. They do not bother to make formal arrests, read the captured their rights, or even announce the reason for detainment. The fact that the number of those abducted thus far appears small and that they have later been released without charges being filed does not make the abuse of basic civil liberties less shocking.

The deployment was ordered by Acting Secretary of Homeland Security Chad Wolf, who has said he is willing to send similar units to other cities that fail to bring an end to the post‐​George Floyd protests, a position that President Trump has affirmed. This has been done over the objections of both the governor of Oregon and the Mayor of Portland. The Oregon Department of Justice has since filed a lawsuit against multiple federal agencies alleging “unlawful law enforcement in violation of the civil rights of Oregon citizens by seizing and detaining them without probable cause.” Those of us who still believe in the importance of protecting state and local prerogatives in the face of an ever‐​encroaching federal government should be alarmed.

The fact that Wolf is an acting secretary is significant; he is able to wield this power by executive will alone and without having to go through the checks and balances constitutionally provided by Senate confirmation, a habit that Cato scholars have condemned in the past. Indeed, Wolf is the fifth to hold the position in the Trump administration and the third to do so in an acting capacity. It is an unprecedented rate of turnover for the office; nearly as many people have filled the position in Trump’s single term (five) as during the last four presidential terms combined (six). It raises the prospect of a future executive being able to cycle through acting officials in order to avoid legislative scrutiny until he or she finds one willing to grossly violate the Constitution.

Customs and Border Patrol (CBP), a division of the Department of Homeland Security, has been deeply involved in the Portland action. The Cato Institute has been a consistent critic of mission creep at CBP ever since the creation of this Frankenstein’s monster of an agency in 2003. Cato scholars have called out the agency for running inhumane detention camps, failing to punish gross criminal misconduct, and operating internal checkpoints deep inside the United States.

Indeed, few people realize that the court system has upheld CBP’s claim that the “border zone” should extend 100 miles from any national or coastal boundary, a line that encompasses nearly two‐​thirds of all Americans. Within that zone and regardless of whether you are an immigrant, CBP agents can search you without a warrant, detain you without probable cause, and even deport citizens without due process. In short, CBP enjoys very few of the checks on police power that hold state and local law enforcement to account and protect basic civil liberties.

Customs and Border Patrol has eagerly sought out opportunities to enhance these already expansive powers. For example, the particular CBP outfit responsible for the abductions in Portland is the Border Patrol Tactical Unit (BORTAC). It is CBP’s version of a SWAT team and it is ordinarily tasked with conducting high risk raids on drug cartel operations near the border. But earlier this year, CBP pushed to take these units off the border and deploy them in “sanctuary cities” to hunt down illegal immigrants. It was a trial run for the current proceedings given that the targeted cities were opposed to their presence and it brought a militarized force round to bear on a process featuring a relatively low risk of violence. It was a questionable decision that seemed to be more about discomfiting political opponents of the administration than a matter of effective law enforcement.

Worse, CBP’s nascent role as a cut‐​rate secret police force that operates at the discretion of the executive branch is merely one manifestation of the creeping, bi‐​partisan paramilitarization of the federal government. During the recent Black Lives Matter protests in Washington, DC, the Trump administration staged a force of at least 1,600 active duty military personnel at bases outside the city. Those troops remained outside. The administration did not need the military to suppress urban unrest when it had paramilitary forces ready at hand. If that sounds extreme, consider that the administration easily gathered some 3,000 non uniformed, heavily armed riot control officers from the Bureau of Prisons, some of whom were used to clear protestors from Lafayette Park so that Trump could stage a photo op in front of a nearby church.

Even the Cato Institute found itself part of the unfolding drama when armored vehicles were stationed outside the building. Cato headquarters had been vandalized during the protests (though the plywood shields eventually installed over the windows were a fairly effective deterrent). Even so, responding to petty vandalism with military vehicles mounting heavy caliber machine guns was a rather incredible and unwelcome escalation. Likewise, Acting Secretary Wolf’s justification for deploying paramilitary units to Portland was a list recounting vandalization of federal property; he didn’t bother to justify an escalation from mostly spray painted graffiti to non uniformed agents shoving people in unmarked vehicles.

The use of Bureau of Prisons personnel in Washington and BORTAC in Portland is just the tip of the spear. The federal government under Presidents from both parties has been adding some 2,500 armed agents to the federal bureaucracy every year since 9/11, amounting to more than 132,000 such officers. 2,300 IRS agents carry weapons like AR‐​15s and P90s, the National Park Service buys thousands of dollars of hollow‐​point bullets each year, and US Fish and Wildlife, afraid of being left out of the fun, obtained silencers for their Glocks. (In their defense, it is hard to sneak up on a fish.)

Most of the 132,000 armed federal agents are based in the DC metropolitan area. While it might be a touch dramatic to call them a Praetorian Guard–given what that evokes of civil instability in the late imperial Roman Empire–it does not take an overactive imagination to think that having the equivalent of a dozen paramilitary divisions in the immediate vicinity of the US capital might be a bad idea for the future of our democracy. Unlike the military with its strict, professionalized chain of command and tradition of avoiding meddling in domestic political affairs, these federal forces serve at the discretion of political appointees and have shown no disinclination against involvement in partisan politics. Consider Washington and Portland—both of which, as it so happens, lie within the 100 mile “border zone”—small trials of how an administration can use paramilitary personnel to repress political dissent. Do we want to entertain even the slightest risk that some future authoritarian executive might try such methods at scale?

This article by Paul Matzko first appeared in CATO on July 21, 2020.