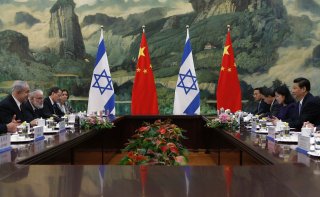 For six decades and counting, the United States and Israel have enjoyed a close friendship. In 1948, the United States was the first country to recognize the new State of Israel; in 2017, it was the first country to recognize Jerusalem as the capital of Israel. According to the U.S. Department of State, “Israel has no greater friend than the United States.” Both countries are united by a “shared commitment to democracy, economic prosperity, and regional security.” The unbreakable bond, we’re told, “has never been stronger.” Now, though, Israel has a new friend: China. Which begs the question: If you are a friend of China, are you really a friend of America?

Four years ago, Benjamin Netanyahu, then the prime minister of Israel, spoke about a “marriage made in heaven.” The “spouse” he was referring to was China, rather than the United States. An unlikely marriage, but a marriage nonetheless.  A marriage of convenience, if you will. As research by the RAND corporation documents, since the turn of the century, Chinese and Israeli relations have become increasingly close. In fact, across the board, from diplomacy to trade, construction to educational partnerships, scientific cooperation to technology investments, and even tourism, the China-Israeli bond appears to be incredibly tight. According to the BBC, before Covid-19, the number of Chinese tourists visiting Israel had never been higher. As the RAND researchers note, China's primary interests in Israel involve “advanced technology” and the country's "location as part of the Belt and Road Initiative.” Israel’s interest in China centers around its desire to “expand its diplomatic and economic ties with the world's fastest-growing major economy.” As the United States struggles to maintain its position as a political powerhouse, Israel is seeking to “diversify its export markets and investments.” Israel, it seems, is prepared to look past the fact that China supports Iran, a country that poses an existential threat to its very existence. In April, Beijing signed a 25-year strategic agreement with Tehran. Surely, a friend of Iran is no friend of Israel. Think again.

As Napoleon once said, “there is only one thing in this world, and that is to keep acquiring money and more money, power and more power. All the rest is meaningless.” The Israeli government, obviously fans of the plucky Frenchman, appears more than willing to turn a blind eye to China’s support for the tyrannical regime in Tehran. All in the name of money, it seems. Bilateral trade between China and Israel is now worth $10 billion. Two decades ago, it was worth just $50 million.

All Eyes on Technology

According to experts, the rapidly evolving field of quantum technology has “far-reaching disruptive potential.” In the United States, there are legitimate fears that China will use quantum computers to steal even more sensitive data from its citizens and branches of government. Guess what country is leading the way in quantum computing.

Although Israel is a small country, with a population of just 8.8 million, it's a dominant player in all things tech. The most recent Bloomberg Innovation Index, an annual ranking of the world's fifty most innovative countries, has Israel sitting in 7th place (the US, meanwhile, dropped out of the top ten). Silicon Wadi, Israel’s answer to Silicon Valley, is booming. According to Startup Nation Central, the area, situated on the coastal plain of Israel, boasts more than 5,000 companies. Of all the Middle Eastern countries, Israel now has the largest number of startups per capita. Many of these companies specialize in advanced technologies, like AI, biotechnology and quantum computing.

Not surprisingly, China appears to have a vested interest in the Israeli tech sector, especially its advances in quantum technology. Since 2019, according to Physics Today, “the number of Israeli firms working in quantum tech surged from 5 to 30.” The new entries “span the gamut of hardware and software for defense and civilian applications,” with the “Israeli army, air force, and intelligence community” forming the “backbone” of the quantum industry. The aforementioned Rand researchers warn that Chinese investment in Israeli technology “could lead to leaks of sensitive technology and cyberespionage.” Rather alarmingly, although “Chinese and Israeli interests in the Middle East are incompatible,” the incompatibility doesn’t appear to be an obstacle. It will be seen if that remains the case. Israel receives funding from Beijing, and in return agrees to hand over the keys of the house to the CCP.

In October, forty-three countries called on China to respect the rights of Muslim Uighurs in Xinjiang. In a joint statement, delivered on the floor of the United Nations, the countries requested the Chinese regime “to allow immediate, meaningful and unfettered access to Xinjiang for independent observers, including the UN High Commissioner for Human Rights and her office.” Of the forty-three different countries willing to call out China's violations of human rights, Israel was not one of them. This should come as no surprise. Around the same time as Israel opted to remain silent, the academic Roeie Yellinek published a provocative paper, aptly titled “How China Learned to Harness Israel’s Media and Booming Tech Scene.”

According to Yellinek, China’s “messaging strategies in Israel” are clearly “designed to maximize Beijing’s political sway in influential Israeli circles.” As China’s rivalry with the United States intensifies, the Chinese regime works tirelessly to change the narrative. The message is simple: Look to Beijing, not Washington, for support. The future lies with China, not the US. Worryingly, in Israel, the message appears to be resonating. “Chinese officials and business executives,” as Yellinkek notes, have learned “to tailor their messaging (including in Hebrew) to Israeli tastes, preferences, and biases.” Furthermore, “Chinese-run media outlets, such as China Radio International (CRI), are learning to adapt their messages to Israeli consumers.”

Which brings us back to that supposedly unbreakable bond between the United States and Israel. It now looks increasingly fragile and precarious. As Israel continues to make advancements in tech, and Beijing continues to fund such advancements, don’t be surprised if those ties between Jerusalem and Washington get completely severed.

John Mac Ghlionn is a psychosocial researcher and essayist. His work has been published by the NY Post, Newsweek, The American Conservative, and other outlets. He can be found on Twitter at @ghlionn.