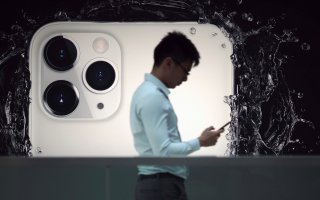 Every couple years, we update our original 2014 blog post that asked the question, “What would an iPhone have cost in 1991?” The purpose is to measure — at least in a rough way — the progress of technology by looking at the components and features integrated in smartphones owned by billions of people. In past years we’ve focused on the three most basic (and easily measurable) components: computation, digital storage, and communications bandwidth. This time, we will also look at another revolutionary facet of smartphones: their cameras. As luck would have it, the digital camera story also has a beginning in our arbitrarily chosen year.

In May 1991, Kodak unveiled the first digital single-lens reflex (DSLR) camera aimed at professional photographers. Called the DCS 100, it used the frame of a Nikon F3, but instead of film it contained a 1.3-megapixel Kodak image processor. It was the middle of the personal-computer revolution, and digital photography presented an array of at least theoretically attractive advantages over film and photo paper. Photographers would be able to capture, see, store, transmit, and manipulate digital photos — computer files composed of bits — far more quickly and easily.

This future was promising, but Kodak’s early system was still clunky. The quality was nowhere close to its legendary Kodachrome resolution and tone, and storing photos proved cumbersome. The camera came with a shoulder-carried digital storage unit which contained batteries, a visualizer, and a 200-megabyte hard disk drive that could store 156 images without compression. At $20,000 a piece (nearly $38,000 in today’s prices), Kodak is said to have sold 987 units.

The iPhone 12, unveiled last month, has three 12-megapixel cameras, which is 36 times the number of pixels of the original DCS 100. At $15,000 per megapixel, circa 1991, that’s $540,000 worth of photographic power in every smartphone. Of course, this most basic measure doesn’t begin to account for the radical improvements in image quality and a hundred other features that make today’s smartphone cameras far superior in many ways to the very best cameras of the past. Lots of professionals like to show how their smartphones can match the best DSLRs, like in this road trip through Scotland. Also, no shoulder harness needed. Right now, I’ve got 61,300 photos on my iPhone backed up to the cloud automatically and retrievable instantly via 5G wireless.

The iPhone 12’s new chip, the A14, also offers nearly double the computing power. But the biggest jump this year is the addition of true 5G wireless capabilities that will, conservatively, triple wireless broadband speeds and potentially boost them 10-fold over the next couple years.