At Hell's Island, A Small Band Of Aviators Saved Guadalcanal From Japan 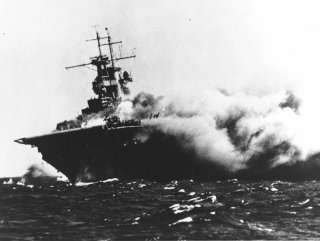 Here's What You Need To Remember: The intense three days of fighting along Lunga Ridge became known at the time as the Battle of the Ridge. After the battle, Lunga Ridge was known to the Marines as Edson’s Ridge, although war correspondents dubbed it Bloody Ridge. The Japanese had one purpose in their fight on Guadalcanal—to recapture their airfield.

Eleven Douglas Dauntless SBD dive bombers crews from the carrier USS Enterprise were forced to land on Guadalcanal Island on August 24, 1942, following the Battle of the Eastern Solomons. They would spend their next weeks living and flying from Henderson Field, recently captured from the Japanese, as part of the so-called “Cactus Air Force,” along with Marine and Army Air Force squadrons. Their job was to help hold the line in the Solomons, but Navy life as they had known it was a thing of the past.

As expected, the Japanese destroyers made their presence known during the early-morning hours of September 13. “We knew we were in for it when an overhead plane dropped a flare on top of our bivouac area,” said Ensign Hal Buell. Dauntless rear seat gunner Stuart Mason and tent mate Milo Kimberlin scrambled for cover. They had dug a foxhole large enough for two outside their tent and had covered it with boards and dirt. As the heavy shells screamed overhead, Mason and Kimberlin were joined by gunners Homer Joselyn and Gene Braun, making for very tight quarters. Explosions rained down with accuracy more alarming than usual. “The shells were coming right through our camp and sounded like railroad locomotives,” said Mason.

Al Garlow and tent mate Jim Cales were caught off guard by the sudden shelling. They simply hit the deck out in the open. Cales locked arms with Garlow and lay facedown in the dirt, expecting the worst. “Chris Fink and I dug a slit trench outside our tent between a pair of palm trees,” said Ensign Jesse Barker. “Everyone made fun of us.” Tent mate Buell and pilots Roger Woodhull, Troy Guillory, and Walt Coolbaugh from the next tent were happy to jump into Barker and Fink’s trench. Coolbaugh methodically counted the explosions as they erupted nearby. “The shells were cutting trees off right over our heads, and the shrapnel was falling around us like hailstones,” said Buell. Lieutenant Turner Caldwell cheated death by diving into the shared foxhole just as a large-caliber shell exploded over the tent area. “The aiming point was our grove of rubber trees, which was marked prominently on the maps,” Caldwell said. Just yards away, Larry Baldinus and Second Lieutenant Donald V. Rose of VMSB-232 were killed and two others were wounded as shrapnel shredded their tent.

“We have had shellings before, but this one is beyond belief,” fighter pilot Bob Ferguson wrote in his diary. When the shelling finally stopped, Caldwell was unable to sleep due to a persistent quivering of the muscles in one of his legs. “I thought it must be a nervous reaction to the shelling,” he said. “But it persisted.” At last, he got up and felt around inside his blanket, where he found a small lizard trying to wriggle free. “He probably was more frightened than I.” After daylight, Caldwell found that his tent was riddled—its tent pole halved by a shell—and his cot had a hole blasted right through it.

Artillery, mortar, and small-arms fire continued in the hills just south of Henderson Field. More than 2,100 Japanese troops were intent on overrunning the airfield. Lieutenant Colonel Merritt “Red Mike” Edson’s Raiders were engaged in a serious fight through the night as soldiers charged them. The Japanese suffered heavy casualties although a few of the soldiers did make it to Henderson Field before they were killed. Caldwell and his aviators were approached by a Marine who warned them that the fighting was getting close. He told them if they heard a certain signal, they were to run to a Quonset hut to be issued a rifle. Gunner Al Garlow became nervous when he heard the Marines say, “It will be every man for himself.” “Things were so bad on the front lines, we were all issued two bandoleers of ammo and a rifle,” said Stu Mason. “I hadn’t fired a rifle since boot camp.”

The intense three days of fighting along Lunga Ridge became known at the time as the Battle of the Ridge. After the battle, Lunga Ridge was known to the Marines as Edson’s Ridge, although war correspondents dubbed it Bloody Ridge. The Japanese had one purpose in their fight on Guadalcanal—to recapture their airfield. One of their battalion commanders, Major Yukichi Kokusho, passed the word to his troops, “We must sacrifice our lives to serve our emperor and our country.” Kokusho and an estimated one thousand of his troops did just that in the multi-day assault on Bloody Ridge.

Just before daybreak, word reached the Flight 300 aviators that their field had been secured. Pilot Hal Buell and gunner Johnny Villarreal, scheduled for the dawn search, were dropped off at their assigned SBD in the parking area southwest of the runway. Buell noticed a young Marine seated in the front cockpit, cleaning his automatic weapon as he approached. “In the darkness, I did not notice the dead Japanese soldier until I almost tripped over him,” Buell said.

The body was lying on the ground a few feet from the aircraft’s tail on the starboard side. The Marine explained that Red Mike had assigned one Raider to each aircraft to prevent the enemy from trying to destroy them. He had given the Japanese soldier a burst of fire into the chest when he jumped up onto the SBD’s wing in the darkness. “A large, bloody smear ran down the wing from the cockpit to the trailing edge of the flaps,” said Buell. He and Villarreal thanked the Marine for his vigilance and warmed up their bloodstained Dauntless for its next mission.

Editor’s Note: The following was reprinted from The Battle for Hell’s Island by Stephen L. Moore. Copyright © 2016. Available from Caliber, an imprint of Penguin Random House LLC.

Stephen L. Moore, a sixth-generation Texan, is the author of multiple books on World War II and Texas history, including Pacific Payback: The Carrier Fly Boys Who Avenged Pearl Harbor at the Battle of Midway and Taming Texas, a biography of his great-great-great-grandfather William T. Sadler, who was one of the first Texas Ranger captains in the 1830s.