Heralds of Destruction: Five Killer Submarines of the Cold War 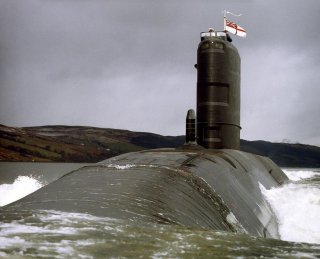 Here's What You Need To Remember: Large, fast, and quiet, the Permit class set that standard for American and British submarines for the rest of the Cold War. Developed with a series of innovations that set them apart from their predecessors, the Skipjack class, the Permits immediately became state of the undersea art. These innovations included powerful bow sonar, a streamlined, deep-dive capable hull, and advanced quieting technology.

But the greatest true submarine campaign never (or only intermittently) went “hot.” Waged with advanced, streamlined submarines, hunting each other from the polar ice cap to the Eastern seaboard, the Cold War undersea “game” lasted for over three decades. In case of real war, these submarines would safeguard (or destroy) NATO’s trans-Atlantic lifeline, and would protect (or sink) much of the nuclear deterrent of America, Russia, Britain, and France.

So what were the best submarines of the Cold War era? For the purposes of this list, we’re excluding ballistic missiles submarines or boomers, which have an entirely different mission from attack boats, built for different requirements. Instead, this list will focus on submarines optimized for killing surface ships or other submarines. The criteria should be familiar from previous lists; to what extent did the vessels perform its strategic mission at a price that its nation could afford?

Cost: Submarines compete with other providers of national security. If they break the bank, they risk crowding out the other capabilities that a nation requires for its defense.

Reliability: When submarines have accidents, the results can be catastrophic. And showing up is half the battle; boats stuck in port can’t fulfill national objectives.

Effectiveness: Could the submarine do the job? How did it stack up against its contemporaries?

Large, fast, and quiet, the Permit class set that standard for American and British submarines for the rest of the Cold War. Developed with a series of innovations that set them apart from their predecessors, the Skipjack class, the Permits immediately became state of the undersea art. These innovations included powerful bow sonar, a streamlined, deep-dive capable hull, and advanced quieting technology. Among the first submarines conceived an optimized for an anti-submarine mission, the Permits could threaten not only the Soviet deterrent, but also the Russian capacity for disrupting the trans-Atlantic lifeline.

The first of fourteen Permits entered service in 1961, the last in 1968. Most of the boats served through the end of the Cold War. Displacing 4200 tons, the Permits could make 28 knots, and could fire both advanced torpedoes and Harpoon anti-ship missiles.

The lead ship of the Permit class was Thresher, commissioned in 1961. On April 10, 1963, she was lost with all hands while conducting a diving test. The tragic loss of Thresher, which imploded after a still-disputed systems failure, overshadowed the long careers of the rest of the class. However, that loss was critical to developing the safety standards that would prevent future accidents. The loss of Thresher, in a very important sense, led to the long history of safety success in the USN’s submarine fleet.

The United States and the Soviet Union were the main players in the Cold War submarine campaign, but were hardly the only entrants. The Royal Navy, initially with some US assistance, developed a series of lethal nuclear submarine designs, eventually making a more than creditable contribution to NATO’s undersea posture. One submarine, HMS Conqueror, remains the only nuclear submarine to have destroyed an enemy ship in anger.

Following up on the Churchill class, the Swiftsures were of innovative design, both in terms of hull technology and propulsion. They were the first full class of submarines to employ pump jet technology, which made propulsion more efficient while reducing noise. The enlarged but simplified hull redistributed machinery allowed a much deeper diving depth than previous Royal Navy subs.

Displacing 5000 tons submerged, the Swiftsures could make some 30 knots submerged. They carried standard torpedoes, as well as Harpoon and (in some boats) Tomahawk cruise missiles. The six Swiftsures entered service between 1973 and 1981, with the last decommissioning in 2010.

The Swiftsures had their problems, including a series of bizarre accidental collisions, some structural failures, and some minor reactor troubles. Nevertheless, they served the Royal Navy very effectively against the Soviets, and would have won victories in the Falklands if the politics had played out differently.

Not every navy can afford an advanced nuclear attack submarine. Nevertheless, submarines solve strategic problems, and not every great submarine needs to be a Porsche. The German Type 209, first built in 1971, served as the strategic answer for a great many navies in the Cold War, and continues to serve today.

For obvious reasons, German submarine development stalled at the end of World War II. Although the Type XXI set the standard for post-war boats, legal restrictions prevented both East and West Germany from building any submarines in the first decade of the Cold War. After a series of designs that ran from non-to-moderately successful, HDW developed the Type 209 class for export.

A diesel-electric, the Type 209 displaces between 1200 and 1800 tons (depending on variant), and can make 23 knots submerged. It can launch both torpedoes and anti-ship weapons, such as the Harpoon. The basic hull design has proven remarkably flexible, spawning a series of variants specialized for different tasks. The Type 209 gives small navies a viable anti-submarine option, as well as the capacity to threaten the surface forces of much larger, more powerful fleets.

Since 1971, 61 Type 209s have entered service with thirteen navies. 59 of those boats remain in service, with two more scheduled for delivery to Egypt in 2016. The ability of the Type 209 to remain in service in so many different fleets, often in widely varying maintenance conditions, attests to the robust nature of the initial design.

The Oscars were the apogee of the Soviet cruise missile submarine, a type that began with the Echo and continued with the Charlie. The first Oscars entered service in 1981,and immediately presented a serious challenge for Western naval planners. Designed specifically for anti-shipping attacks, these subs could strike NATO carrier groups with P-700 Granit missiles from a range of up to 300 miles. This widened the area that American anti-submarine vessels needed to patrol, and meant that attacks could come from unexpected vectors. Equipped with a conventional warhead, the Granit could easily cause a mission kill. With a nuclear warhead, it could give a carrier battle group a very bad day.

And the Oscars were huge. Displacing 16500 tons, they could make 32 knots submerged. They carried 24 Granit missiles, in addition to a bevy of torpedo launched weapons.

The United States and the United Kingdom would eventually adopt the same practice as the Russians, although instead of dedicating specific sub types to cruise missile launches they would focus on converting missiles for launch from conventionally designed nuclear attack subs. Later boats in the Los Angeles class would carry dedicated cruise missile silos, technically making them SSGNs instead of SSNs, although the designation never changed in practice (until the conversion of four Ohio class boomers to the cruise missile mission). The real utility of cruise missiles has been land attack rather than naval attack, as cruise missiles launched from US subs have proven quite effective in several recent conflicts.

The Soviets completed only five Oscars before the end of the Cold War, and another eight after. One, the Kursk, was lost in one of the most horrific accidents in submarine history. Several others, however, remain in service with the Russian Navy.

The United States enjoyed technology and designs advantages for most of the Cold War that allowed its submarines to operate much more quietly than their Soviet counterparts. US technological innovation and industrial practice made it possible for the USN to develop and maintain submarines with advanced noise-suppression technology. The USSR’s tried to answer through raw weight, both in terms of size and number of boats.

Soviet espionage also tried to even the score. The fruits of the Walker spy ring and the Toshiba-Konigsberg scandal spread across several classes of Soviet submarine, but the Akulas benefitted most of all. The Akula’s were the first Soviet submarines to compete with American submarines on noise, reportedly matching the Los Angeles class at most speeds. Displacing 8000 tons, the Akulas could both outrun and outgun the American Los Angeles class, making up to 35 knots and carrying a larger array of torpedoes and cruise missiles.

Steel hulled (unlike their Sierra and Alfa predecessors), the Akulas also achieved cost-savings while improving mission capability, a rare feat for a modern weapon system. Five Akulas entered service before the Cold War ended, with a total of fifteen eventually entering service. Nine remain in Russian service, with another on loan to the Indian Navy.