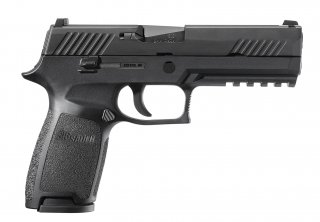 Here's What You Need to Remember: The X-Carry carries on the tradition of compact pistols ergonomically similar to their older, larger siblings.

Sig Sauer’s new P-320 pistol is enjoying a considerable streak of publicity, in large part due to the U.S. Army’s adoption of it as the service’s new handgun. One new variant of the rapidly growing P-320 line is the X-Carry, a compact handgun designed for concealed carriers and those that want smaller firearms with the handling qualities of full-sized pistols. The P320 X-Carry carries on a tradition of compact firearms that don’t compromise on performance.