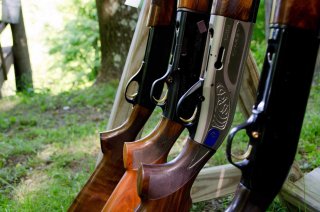 Here's What You Need to Know: The thing is, shotguns are such niche weapons for military use that the design rarely needs drastic, crazed improvements.

I love shotguns. Oddly they haven’t changed much over the years, at least compared to other firearms. What works, just works, right? Well, that doesn’t mean that things never got a little crazy.

Today we are going to look at some of the crazy shotguns developed for the United States military. Spoiler alert: Most of these concepts never got off the ground floor, and as such, their lifespans were rather short.

Firefights in Vietnam seemed to be rather varied. Like most places wars are fought, Vietnam offered a diverse environment. But some parts of the country offered nothing but dense, brutal jungle. Thus, plenty of fights was close range, and shotguns had an advantage.

Shotguns could dominate in close-range power, and the fact they fired multiple projectiles at a time increased their hit potentials and made them easier to use against moving targets in close quarters. The shotguns at the time, however, just weren’t up for the job in the sweltering jungles of Vietnam. Thus, the Remington 7188 was born.

Of all the crazy shotguns on this list, the Remington 7188 is the most normal. It looks so unassuming with its wood furniture and simple design… Almost like the shotgun your dad kept hanging above the door in his study.

In fact, it is essentially just your standard Remington 1100 with some slight modifications. Simple things, like an extended magazine tube, a bayonet mount, a barrel shroud… and the ability to fire fully automatic!

That’s right. The Remington 7188 utilized a select-fire mode to go from semi-auto to full auto with the flip of a switch. A 12 gauge shotgun seems pretty dang hard to handle in full auto, but the rate of fire was rather slow and controllable. It held only eight rounds, so it emptied quickly. This gun allowed a commando to blast away with a ton of shot in mere seconds. Sadly, even this gun wasn’t always reliable, especially in the unforgiving jungles of Vietnam.

Carroll Childers worked at the Naval Special Warfare Center in Virginia and helped develop a ton of weapons for America’s elite war fighters. The Special Operations Weapon, or SOW, wasn’t a mainstream project. He got a little money here and there and was a one-man crew designing it around time spent on other projects. The SOWis really waht started the idea of crazy shotguns that continues throughout the rest of this article.

Childers had developed a mag fed Remington 870, so he took the mag from the 870 and fitted it to the SOW. The SOW ended up being a full-auto shotgun designed to be fired from the hip like an action star from the ’80s.

The weapon featured two pistol grips and utilized a top-loading magazine. The mag held 20 rounds of 12 gauge and almost tripled the firepower of the Remington 7188.

The SOW utilized a very controllable 200 rounds per minute firing rate. That’s slow enough to easily fire a round at a time. The full auto action still allowed the user to blast away through the jungle at opposing forces. Sadly, this is one of the many crazy shotguns which never made it much further than the prototype stage.

According to the classic American film, “The Expendables,” the AA-12 delivers. Of all the crazy shotguns on this list, the AA-12 made it the furthest in development. In fact, people are still kicking the gun around trying to get a contract. Like all the previous crazy shotguns, the AA-12 offered shooters a select fire option.

The design started in the 1970s, and over time the weapon adapted and developed into a modern shotgun that would make the M16 proud.

A liberal use of polymer in the weapon construction and a unique forced gas-operated API blowback system kept both weight and recoil in check. The weapon fired from an open bolt to ensure both a lack of cook-offs and that plastic hulls wouldn’t melt in the chamber.

A firing rate of 300 rounds per minute kept things controllable but quick, and the magazine-fed action allowed it to be quickly reloaded. Magazine capacities ranged from 8 round box magazines to 20 and 32 round drums. A variety of ammunition was produced for the gun, including Frag rounds which promised mini grenades which could potentially make these fully automatic, mini grenade launchers.

No wonder Adrien Brody used one to fight the Predator.

HK CAWS: The bullpup 12 gauge of the future

In the 1980s, the military was actively looking for crazy shotguns for a program called the Close Assault Weapon System, aka the CAWS, which would use 12 gauge ammunition that would not be compatible with commercial 12 gauge. The CAWS program spat out two different shotguns. The first we’ll mention is HK’s own CAWS. The HK CAWS took the shotgun to a bullpup layout that was magazine-fed.

As required, the weapon used a 10 round box magazine of 12 gauge ammo that was 76mm long. Olin developed a 3-inch shotgun shell for the CAWS that was belted brass, each containing eight tungsten pellets.

These pellets could penetrate 1.5mm of steel plate, which is pretty impressive for a shotgun. The shells could also load standard buckshot and flechettes, in case the user needed to punch a big hole in something.

HK equipped their CAWS entry with selective fire capability, and the weapon used a recoil-operated design with a self-regulated gas assist. This means the barrel moved with the bolt for a short period as the weapon cycled, and gas could help with the recoil operation. This neat futuristic design didn’t go beyond the CAWS program.

AAI is the king of weird weapons, especially during Vietnam and the latter half of the Cold War. AAI designed tools like the famed M203 grenade launcher that would mount beneath the barrel of a rifle, so it wasn’t all crazy shotguns and suppressors. In fact, the AAI CAWS war a fairly conservative approach to the CAWS shotgun concept. AAI’s entry used a standard layout with an M16 stock and pistol grip with a 12 round magazine. The weapon utilized a recoil-operated system with a selective fire option.

The weapon used a fancy load AAI christened SCMITR, a proprietary 12 gauge round designed for their entry. The shot shell utilized a series of flechettes that reportedly created devastating wound channels and lent their CAWS a longer effective overall range than traditional shotguns.

These flechettes are brutal at close range and fin-stabilized for a greater overall range.

The AAI CAWS could cut through 3mm of low-carbon steel. Not bad at all for a scattergun. The AAI CAWS’ specialized and proprietary shotgun shell was slightly shorter than most standard shotgun shells, so the magazines could be shorter and easier to handle. Sadly, the AAI CAWS died with the CAWS project.

The eventual fate of all crazy shotguns

Sadly, these crazy shotguns never made it past the “cool idea in testing” stage, and to be honest, that makes sense. The thing is, shotguns are such niche weapons for military use that the design rarely needs drastic, crazed improvements. The platform works in its simple configuration, and there’s something to be said for the old axiom, “if it ain’t broke, don’t fix it.” Even so, it’s always fun to see what engineers come up with, and who knows what the future may bring.