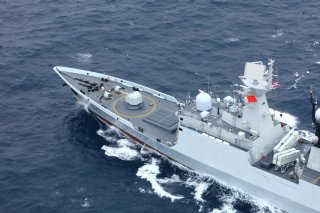 Here's What You Need To Remember:  Despite the many inherent advantages enjoyed by smaller “street fighter”–type warships, including low cost (and thus higher numbers), stealth and an ability to operate in the littoral environment, the Chinese Navy may now instead have its sights set on genuine “blue water” capabilities instead.

Chinese Navy watchers can be forgiven for focusing their attention on capital ships, such as the aircraft carrier program and the new “cruiser” Type 055. There has even been some speculation lately that revolutionary rail gun technology could be integrated into the new cruiser project. That would seem unlikely at this late date, but it will no doubt be an interesting day in world history (and one coming up relatively soon) when China’s first aircraft-carrier battle group sets sail for the Indian Ocean. And the first cruise for that battle group into the Atlantic may not be too long after that, given the unfolding scope of Chinese naval ambitions. Yet the aircraft-carrier project is mostly of symbolic import—significant, to be sure, but not overly concerning.

The strategic issue that might cause more anxiety is the ever-growing prospect that Beijing wields the requisite amount of firepower to “call the shots” in the western Pacific. For that purpose, a vast clutch of smaller ships is likely to be far more determinate than some expensive behemoth that would most likely become a prize for lurking submarines in any hypothetical conflict. Indeed, the Chinese appear to have embraced with gusto the “street fighter” naval concept that originated almost two decades ago in U.S. Navy circles, but which also has a longer history dating back at least to the so-called “Jeune École.” The cheaper, more numerous small surface combatants were intended to give a country options short of sending in major naval forces that could spur escalation or, alternatively, place those capital ships at unacceptable risk. There seems to be wide agreement among naval analysts, moreover, that Beijing has bested Washington, at least in round one of this particular naval strategic contest. That is because the PLAN’s Type 056 corvette and the Type 054 frigate have been judged to be highly successful ship classes, while the U.S. Navy’s Littoral Combat Ship (LCS) has struggled, to say the least.

We will not rehearse the difficulties of that unfortunate contest here, but it is worth considering that China could be on the cusp of a deploying a new frigate design altogether—ironically one that draws substantially on a key naval architecture innovation of the American LCS. About a year ago, China unveiled a model at an Abu Dhabi arms show that raised significant eyebrows. That model was analyzed thoroughly in various defense fora. However, this Dragon Eye column can perhaps fill in these analyses by exploring the new Chinese frigate concept through the eyes of Chinese naval analysts themselves, since a few articles have now been published in the major Chinese naval magazines.

A 2017 article from Modern Ships (现代舰船) explains that the Chinese trimaran frigate had an important precursor that afforded Chinese engineers good experience with this type of vessel. This precursor is a little-known ship type called the Type 917 trimaran rescue ship (三体救生船). Three prototypes were built, starting in 2012, and, perhaps indicative of the design’s importance, one prototype was given to each of the PLA Navy’s three fleets. The design was apparently highly successful in the rescue role. But what really seems to have impressed Chinese naval architects was apparently the fact that the 550-ton Type 917 could have roughly the same dimensions in its flight deck as a four-thousand-ton Type 054 frigate. Beyond the design bureau, however, the article notes that Chinese were sorely disappointed (让人大跌眼镜) by the fact that Type 917 was no “Chinese LCS,” because it had little armament to speak of.

If China’s new trimaran frigate does actually become a reality, the ship will not lack for armament. Along with its seventy-six-millimeter main gun, the ship also is said to possess a thirty-two-cell vertical launcher system (VLS), as well as two quad launchers for antiship cruise missiles (ASCMs), two close-in weapons systems and two chaff launchers. There is a bow-mounted sonar system, but an analysis in Naval and Merchant Ships (舰船知识) contends that a towed array system is “not visible” in the design. Nevertheless, this Chinese analysis contends that the American LCS “is inferior to the Chinese trimaran in overall, comprehensive combat capabilities [在整体的综合作战能力上不如中方的三体舰].”

For actual dimensions of the ship, this analysis offers that the Chinese trimaran frigate would displace 2,450 tons, with a length of 142 meters, a maximum beam of 32.6 meters and draft of 6.2 meters. The crew size is planned to be one hundred. With “all electric drive [全电推进动力系统]” and pump-jet propulsion, according to the Naval and Merchant Ships analysis, the Chinese trimaran frigate is projected to have a maximum speed of thirty-five knots. The Modern Ships discussion confirms the above dimensions and concludes that the trimaran frigate’s speed “will far exceed that of the PLAN’s 056 and 054A type frigates.” Still, the former piece concedes that this speed is much slower than the American LCS and that the Chinese trimaran could be inferior in terms of sensors, as well as deck and hangar space too.

Pointedly, it is said that the Chinese trimaran frigate does not adopt the approach of the American LCS in developing differentiated “combat mission modules [换作战模块方式].” Rather, its singular design is capable of coping with all types of threats across the spectrum. However, one of the most intriguing passages from the Modern Ships analysis may imply that this “street fighter” has antisubmarine warfare (ASW) at or near the top of its priority list of missions. It is said that the Chinese trimaran, unlike most of China’s surface combatants, will have a hangar that can house two helicopters. The vessel can accommodate “mid-size and even the thirteen-ton large-size shipborne helicopter [中型甚至13吨级的大型舰载直升机].” This is almost surely a reference to China’s new Z-18F ASW helicopter. Given that the PLAN has long bemoaned the ineffectiveness of its light naval helicopter fleet (primarily Z-9 and Russian-made Ka-28), it might be conceivable that this ship has been built to suit the PLAN’s new suite of helicopters that will be entering the fleet in force over the coming decade. The Naval and Merchant Ships analysis also notes that the VLS tubes on the trimaran frigate will fire China’s new missile-torpedo that can deliver long-distance ASW strike capability when queued by a distant helicopter.

Nevertheless, it remains unclear if the Chinese trimaran will even be built for the PLA Navy. The model was revealed, after all, at an international arms expo and both Chinese analyses here suggest the ship enjoys excellent export potential. Thus, the Naval and Merchant Ships article concludes, “This type of warship will actually meet the demand from countries that lack the ability to construct large warships.” Despite the many inherent advantages enjoyed by smaller “street fighter”–type warships, including low cost (and thus higher numbers), stealth and an ability to operate in the littoral environment, the Chinese Navy may now instead have its sights set on genuine “blue water” capabilities instead.