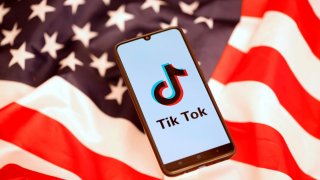 On Monday, Americans witnessed a stunningly brazen act of what can only be called political gangsterism. Speaking from the White House, Donald Trump declared that for “security reasons” the popular video sharing platform TikTok—which is owned by a Chinese company called ByteDance—would be “shut down” in the United States on September 15, unless it were purchased by Microsoft or another American firm. Moreover, since the government was effectively forcing the sale by threatening to shutter TikTok, Trump expected the U.S. Treasury to get a piece of the action—though the exact legal mechanism by which the government would take payment for this “service” was left vague. It’s worth quoting Trump’s explanation at length:

I did say that if you buy it, whatever the price is, that goes to whoever owns it, because I guess it’s China, essentially, but more than anything else, I said a very substantial portion of that price is going to have to come into the Treasury of the United States. Because we’re making it possible for this deal to happen. Right now they don’t have any rights, unless we give it to ’em. So if we’re going to give them the rights, then it has to come into, it has to come into this country.

It’s a little bit like the landlord-tenant [relationship]. Uh, without a lease, the tenant has nothing. So they pay what is called “key money” or they pay something. But the United States should be reimbursed, or should be paid a substantial amount of money because without the United States they don’t have anything, at least having to do with the 30%.

Let’s not mince words: This is the Mafia’s business model. “We’ll threaten your competitor, forcing them to sell the business cheap, but we expect our cut in return.” The national security powers of the executive branch are now officially muscle for hire.

But how—one might reasonably wonder—could an app best known for videos of teenagers dancing and lip-syncing pose a national security threat in the first place? A threat so dire it justifies the use of emergency powers to close down an expressive platform used by millions of Americans every day? Can a president even do that?

Let’s start with the supposed threat. Like many other apps, TikTok collects quite a bit of data about its users, some obvious (such as personal profile information), some less so (device configuration; location on videos that have been geotagged). That data is stored on U.S. servers (with backups in Singapore), and the American CEO of the company’s U.S. subsidiary says they would not share it with the Chinese government. But in theory, under China’s security laws, the parent company ByteDance could be ordered to produce that data to the Chinese government for some presumptively nefarious purpose.

As other analysts have noted, there is something very odd about singling out TikTok as a focus of panic on this front, as the type of personal data collected would be of relatively low intelligence value to China. (Contrast the recent compelled divestiture of the gay dating app Grindr by Chinese firm Kunlun, where there was at least an intelligible argument that the specific nature of the data collected made it uniquely useful for blackmail.) One can imagine how such information might be abused by a government interested in monitoring its own citizens, but it’s harder to articulate any coherent reason midwestern teens posting cat videos should be fearful that Maoists are scrutinizing their system settings or geotags. As long as we’re spinning hypotheticals, however, TikTok is hardly the only potential corporate source of data about Americans. The Chinese firm Lenovo is one of the largest hardware manufacturers in the world, and owns the U.S. smartphone maker Motorola Mobility. The Qingdao-based Haier Group owns GE Appliances, which sells Internet-enabled devices to the American market. Chinese gaming giant Tencent owns the company that makes League of Legends—one of the most popular games in the world for over a decade—and holds a large stake in Epic Games, developers of the more recent megahit Fortnite. It’s not clear why the data collected by TikTok, in particular, poses a greater security threat than the data collected by innumerable other Chinese-owned companies—or, for that matter, by American companies that make use of overseas call or data centers.

One might reasonably respond that we should be concerned about any foreign exfiltration of data on U.S. persons. But if so, the rational response is a generally applicable data framework guided by neutral rules and principles, not the arbitrary deployment of the most extreme possible policy response against individual companies that commit the sin of becoming too popular or prominent. The disproportionate panic over TikTok seems to be substantially driven by the fact that it’s the hot new thing—heavily used by teens, which helps trigger our protective instincts—and therefore attracts media attention more readily than denunciations of foreign-owned appliance makers.  And the message to foreign companies considering investing or doing business in the United States is: You may be expropriated virtually overnight, subject to the whims of the president, without having done anything wrong or violated any preexisting rule.

It’s also worth noting that the argument being deployed against TikTok could just as easily be turned on the United States. Under section 702 of the Foreign Intelligence Surveillance Act, the U.S. government may demand warrantless access to foreign users’ information—including private communications—from American tech companies. In 2019, a stunning 204,968 foreign persons were targeted for “collection” under that single authority. Indeed, a data sharing agreement between the United States and the European Union was recently invalidated—and its future remains uncertain—in part because the E.U. high court deemed such authority inconsistent with the privacy rights of Europeans. The logic behind a ban on TikTok works equally well as a rationale for the rest of the world to ban Google and Facebook.

None of this is to deny that TikTok might present a legitimate security risk for some users. Notwithstanding the company’s assurances, democracy activists with plans to travel to China would probably be wise to avoid installing it, and government agencies that handle sensitive information would be amply justified in barring it (and many other apps) from employees’ phones. But government agencies already have and enforce their own elaborate device security policies. (Recent legislative proposals to specifically bar TikTok from government devices suggest some lawmakers mistakenly believe these agencies require granular security guidance from Congress, at the level of individual apps—an unsettling prospect, but fortunately untrue.) The government need not impose on every citizen the security measures appropriate for NSA analysts, or threaten to kick millions of Americans off an expressive platform in order to protect Naval Intelligence officers.

Others worry that TikTok could serve as a vehicle for Chinese propaganda and misinformation. But as the 2016 election should have made clear, foreign governments hardly need to operate their own media platforms to engage in such information operations, and there is no good reason to think that TikTok videos pose a bigger threat on this score—whether the platform is owned by Microsoft or ByteDance—than Facebook posts.

So can the president “ban” TikTok? There are a number of legal mechanisms available to the executive that might have that practical effect, though given the thin and almost entirely hypothetical nature of the “national security threat” posed, it would be a gross abuse of power to do so. The Committee on Foreign Investment in the United States can retroactively demand that ByteDance divest itself of TikTok. Trump could invoke the International Emergency Powers Act, declaring that the popularity of the video sharing app constitutes a “national emergency” and imposing sanctions on its parent company, which would force the Apple and Android app stores to delist the app. That would not remove it from the millions of phones on which it is already installed, however, and at least in theory the platform could continue to operate on overseas servers, both for existing users and those who access it via the Web rather than an app—a perverse result if the aim is to prevent Americans’ data from being exfiltrated to China. To truly prevent Americans from accessing a foreign platform would, ironically, require something akin to China’s “Great Firewall,” long considered an emblem of the country’s authoritarian repression of speech.

However effective such a ban might ultimately be in practice, the prospect ought to be appalling from a First Amendment perspective. Again, this is a platform for expression used daily by millions of Americans. While—as with most social media—much of the content is frivolous, it has also become a vehicle for political speech and organizing. Perhaps not coincidentally, online teens, organizing primarily via TikTok, successfully pranked a recent Trump rally in Tulsa, submitting bogus registrations and inflating attendance expectations, which likely contributed to the spectacle of conspicuously empty seats that is said to have infuriated the president. It is hard not to wonder whether now that the president has announced that, absent a deal with Microsoft, he intends to attempt to shutter the entire platform for “security reasons” less than two months before a presidential election—a drastic response that would radically disrupt the legitimate speech of citizens. There may be valid data privacy concerns about foreign-owned online services that could be addressed by an appropriately general legislative framework. But killing a massively popular venue for speech by executive fiat would be, as Trump is fond of saying, a “cure worse than the problem.”