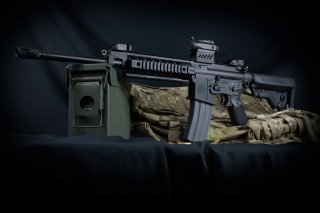 Here's What You Need To Know: Sig Sauer appears to be letting the rifle fall into obscurity, favoring the newer SIG MCX in marketing and promotion.

When the HK released the HK416 in the early 2000s, it rapidly became a hit with elite military and police forces worldwide. Driven by a slick marketing campaign and favorable (albeit disputed) test results from the U.S. military, the HK416 represented a “better mousetrap” version of the AR-family of rifles for many users. Though the advantages of the HK416 have become debatable in modern years, with upgrades to traditional AR rifles enhancing their reliability, Sig Sauer, Inc looked to create their answer to the HK416 in the late 2000s. The result, released in 2010, was the SIG 516.

While Sig doesn’t like to emphasize the connection, the SIG 516 was conceived in many ways as a direct counterpart to the HK416. According to the late Jim Schatz, a former H&K employee and H&K expert, one of the key people involved in the HK416 was the lead on the SIG 516 development team. The name “SIG 516” is likely just a riff on HK416.

In the basic layout, the SIG 516 also heavily resembles the HK416. Both rifles use a short-stroke tappet system placed above the barrel, which drives back a modified bolt carrier in the upper receiver. This allows the rifles to be easily compatible with most AR lowers without much modification.

However, Sig Sauer’s design was found to be relatively close to an existing piston AR, the LWRC IC-A5. This resulted in both LWRC and Sig Sauer, Inc. being brought to court in 2016 on patent claims on the original design of the SIG 516’s piston system.

The 516’s piston design does have some advantages versus the 416. The 516 has a 4-position gas regulator, allowing for reduced recoil and wear. The 416’s piston is self-regulating in theory, but in the default position tends to give increased recoil over an adjustable gas system. The HK416 would receive an adjustable regulator in the HK416A5 variant.

The bolt carrier group of the 516 is also closer to that of the AR than the HK416’s. The HK416 bolt carrier group has a unique firing pin safety in the bolt that makes it more expensive to manufacture and safer but limits it to working with full height hammers in the fire control group of the lower. The 516 lacks this, likely due to cost reasons and interoperability with all fire control groups.

Despite its theoretical advantages in cost and recoil, the SIG 516 saw far less adoption by military and police units compared to the HK416. It’s in use by a variety of SWAT units in the United States and was seen in the hands of Turkish special police in 2017.

Sig Sauer appears to be letting the rifle fall into obscurity, favoring the newer SIG MCX in marketing and promotion. The MCX has a more AR-18 style layout, which allows for a folding stock. (The SIG 516 and HK416 does not support conventional folding stocks due to using a traditional AR-15 buffer tube layout.)

The tendency for Sig Sauer to promote a new rifle every few years is probably disconcerting to potential users. Before the SIG 516, Sig Sauer promoted the SIG 556xi, a version of the venerable SG550 rifle adapted to use STANAG aluminum magazines. However, as this rifle didn’t sell well, SIG quickly moved onto the 516, and now the MCX. Comparatively, H&K simply iterates on the existing 416 design.