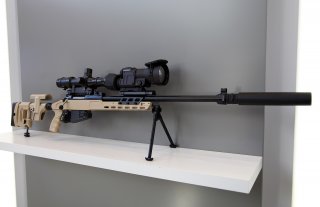 Here's What You Need To Know: The sum of numerous new features shows that the SVCh is a necessary upgrade for the Russian military and paramilitary forces.

In November 2019, Kalashnikov Concern announced that they would begin serial production of the Snaiperskaya Vintovka Chuvakin (SVCh) sniper rifle in 2020, finalizing it as an official replacement for the SVD more than 50 years after it entered service. The SVCh is already notorious following press photos that showed Russian President Vladimir Putin firing the rifle. But in what ways does the SVCh improve on the SVD?

Unlike the SVD which was originally designed only for the 7.62x54R cartridge, the SVCh is designed to be a modular rifle system in multiple calibers. Variants of the SVCh that have been announced are a standard 7.62x54R version, a 7.62x51mm NATO version for export or by use by internal forces that prefer that caliber, and a .338 Lapua Magnum version. As the .338 Lapua Magnum caliber is larger in both diameter and length compared to the 7.62 cartridges, the .338 SVCh will use a significantly different receiver, whereas the 7.62 versions will be able to swap calibers with just bolt and barrel changes. The size difference is evident when the three rifles are displayed together.

Design-wise, the SVCh is thoroughly modern compared to the SVD. In many ways it looks like a generic Western precision semi-automatic rifle. The old wood furniture is gone in favor of a modern adjustable stock and free float handguard. This grants the SVCh the ability to mount a bipod in most common positions, something the SVD couldn’t do. The SVD only gained the ability to mount a bipod in the forward position in the SVDM, and required a long strut under the handguard to do so to prevent the rifle resting on the bipod from flexing the barrel.

The old school AK-style safety is removed in favor of a thumb safety. The charging handle of the SVCh is also moved to the left side of the rifle to eliminate the need to break firing grip or reach around to charge the rifle. A full length Picatinny rail is present on top of the rifle, no provision is made to accommodate older dovetail rail sights. However, the 7.62x54R version of the SVCh is designed to accept magazines from SVD rifles, granting it some degree of backward compatibility with existing inventory.

The sum of these features shows that the SVCh is a necessary upgrade for the Russian military and paramilitary forces. As Russia modernizes its infantry forces, a long upper Picatinny rail is necessary if one wants to mount clip-on night vision or thermal scopes, which Russian SOF have been spotted with in Syria. Russian SOF have also been seen using Western 7.62x51mm rifles, so the need for a proper domestic alternative is clear.

What’s odd is the fact that Russia seems wedded to the 7.62x54R caliber for a precision role. On one hand, this is understandable as Russia manufactures excellent sniper rounds, the 7N1 and 7N14 in this caliber. But this caliber effectively limits magazines to 10 rounds due to how the rims of cartridges must be stacked for reliable feeding. Photos of the SVCh with longer, 20 round or greater magazines are invariably of the 7.62x51mm variant.