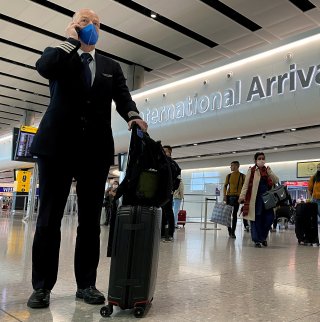 Nearly all international arrivals to the UK must now quarantine for 14 days, according to the new policy that came into force on June 8, presented as an attempt to limit spread of the coronavirus. This policy, I argue, could be illegal.

UK courts have the power to review governmental policies under a process called judicial review. Two well established grounds for judicial review in the UK are rationality and reasonableness. Any policy found by the court to be irrational or unreasonable can be declared illegal and abolished.

On both counts, it can be argued that the UK’s quarantine rule fails.

It can’t do what it sets out to

As a ground of judicial review, rationality is best understood as deploying the appropriate means to achieve certain ends. An irrational governmental decision would be one that deploys means that cannot achieve their purpose.

So, can the quarantine actually hope to achieve what it sets out to?

With a lack of evidence that the means (quarantine for international arrivals) can achieve the end (keeping infections down) the policy is irrational – and therefore probably illegal.

Basing a policy that aims to protect public health on scientific evidence could have helped make it rational. Alas, the government appears not to have done that.

Edinburgh University’s Mark Woolhouse, a member of the group modelling the pandemic for SAGE, the government’s advisory committee, described the quarantine as making “no sense” – and a number of other experts have also been critical. Section 2.5 of the government policy states that it’s “informed by science”, but the government hasn’t revealed what advice is behind the policy.

In fact, the government’s chief scientific adviser, Sir Patrick Vallance, refused to back the blanket quarantine policy, saying that the advice from SAGE was that quarantines are most effective when they’re applied to people from countries with higher rates of infection. In the UK’s case, this would only be a handful of countries, such as Brazil and the USA.

Quarantine’s negatives have been ignored

Even if we assume that the quarantine could achieve its purpose, it could still be argued that the policy is unreasonable. Reasonableness, as a ground of judicial review, is best understood as a weighing and balancing test. An unreasonable decision is one that results from giving distorted weight to relevant considerations.

In our case, the primary relevant reason for imposing the quarantine policy is protecting public health. And for this to have weight, we need to know that the policy offers significant extra protection to public health. But without knowing the scientific advice behind the policy, we have no measure of its protectiveness at all – and so no grounds for giving this reason significant weight.

There’s also a second potentially relevant reason: the polls show that 63% of the public supports the quarantine policy. If introducing a quarantine helps maintain public trust that the government is doing the right thing, then arguably that could make the policy reasonable. It’s important to maintain trust in government and the measures it imposes, especially during times where public obedience to governmental policies is essential to protect public health. However, public opinion shouldn’t be considered in this case as it is probably shaped by irrational fears and a lack of knowledge.

The reasons against the policy, however, are multiple and weighty. The policy is limiting people’s freedom of movement and their right to liberty. It’s preventing airline and travel companies from planning ahead. It’s denying income to many whose livelihood depends on international tourism. And it’s significantly increasing the risk of job losses to tens of thousands of people.

This policy, therefore, arguably results from incorrectly judging that the speculative public health benefits of quarantine outweigh the certain harms that will be caused by it. I believe that could make it illegal as well.

Evaluating the legality of lockdowns generally, or a set of complicated and intertwined lockdown rules, is a mighty task. Here, however, we face an isolated policy that on balance seems irrational, unreasonable and potentially destructive. For these reasons there’s a case for it being overturned.