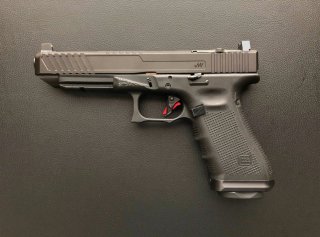 The Glock 34 Generation 5 in 9x19mm is the latest release in Glock’s line of “extended” slide pistols. While originally meant for competition, it has found use with police and military teams as well, which appreciate the superior shooting characteristics of the Glock 34 over other Glocks. Its release has interesting implications for the future of Glocks though, as it is the only fifth-generation long slide model.

The Glock 34 is a toned-down model of the first competition Glock, the Glock 17L. The Glock 17L packed a 6-inch barrel inside a frame 9.5 inches long. While it saw some usage on the competition circuit, this was perhaps “too much Glock” for many people as the slide dangled nearly two inches off the end of the frame, making the pistol balance oddly and giving it a gangly look.

The Glock 34 cut down on this by over half an inch, reducing the overall length to 8.8 inches and the barrel by the same amount. This reduction in size allows it to balance better, makes it more proportional in size, and makes it more practical to make a holster for.

As a result, the 34 saw some adoption by tactical teams, who perhaps planned to make use of the Glock 34 as a primary weapon system in confined areas, so the improved shooting characteristics due to the longer barrel were appreciated. French special units are known to use the Glock 34, and, according to Glock’s website, some SWAT units use them as well.

Probably due to the popularity of the Glock 34, Glock also made similar “long slide” variants in .45 ACP, 10mm Auto, and .40 S&W with the Glock 41, 40, and 35, respectively. But Glock only makes fourth-generation Glock 41s, 40s, and 35s, and has not updated them to the fifth generation standard. The only fifth-generation Glocks are in 9x19mm.

This could perhaps suggest that Glock, following market trends, is focusing on 9mm instead of trying to provide guns in a wide variety of calibers. This makes sense, as many police departments and federal agencies have been switching from .40 S&W and .45 ACP, as well as specialty calibers like .357 SIG to 9x19mm as 9mm bullet technology has improved.