A High Stakes Game of Cat and House: How America Hunted Submarines During WWI 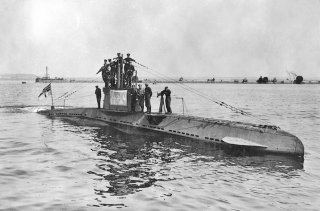 Here's What You Need To Remember: While World War I submarines could only remain submerged for brief periods, they were highly successful at picking off unescorted merchants ship in the Atlantic and Mediterranean. Washington had to do something about that. Enter the convoy system, which proved to be a dramatic success at decreasing ship losses.

When Congress voted on April 6, 1917, to declare war on Imperial Germany, the task before the U.S. Navy was clear: it needed to transport and supply over a million men across the Atlantic despite the Imperial German Navy’s ferocious U-Boat campaign, which reached its peak that month, sinking over 874,000 tons of shipping.

Notably, on July 18 the boat U-156 surfaced off the coastal town of Orleans on Cape Cod, Massachusetts, and proceeded to destroy a tugboat, four barges, and the nearby shoreline with its cannons. Nine Coast Guard HS and Model R-9 seaplane bombers scrambled from NAS Chatham and peppered the withdrawing U-boat with bombs—none of which exploded.

The navy’s deadliest anti-submarine measure was the North Sea Mine Barrage, a 230-mile-long chain of 100,000 naval mines between the Orkney islands and Norway. U-Boats seeking passage to the Atlantic had to wend through eighteen rows of Mark 6 mines concealed at depths of twenty-four, forty-nine, and seventy-three meters deep strung together with piano wire. Each of the horned steel spheres contained three hundred pounds of TNT. The barrage cost $40 million ($722 million in 2018 dollars) and required the deployment of eight large steamships. However, it sank between four and eight U-Boats—including the infamous U-156—and damaged another eight.

Despite its unglamorous duties, the U.S. Navy learned valuable lessons in the Great War about employing convoys, smaller submarine-hunters, and maritime patrol planes that would save many lives in the even more destructive conflict that followed two decades later.

This first appeared in December 2018 and is being republished due to reader interest.