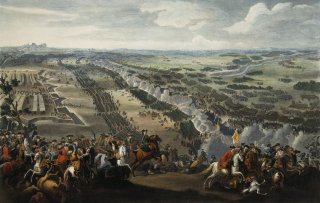 Key point: Sweden once was mighty and it nearly defeated Russia. However, Russia engaged in a scorched-earth campaign and managed to outlast and defeat the Swedish invaders.

When most people think of Sweden, they think of IKEA furniture, depressing murder mysteries and a foreign policy of strict neutrality.

Yet 400 years ago, Sweden was a major military power. Indeed, it was even an empire, a fact that must make today's Swedish leftists cringe.

Under young King Gustavus Adolphus, a brilliant and innovative military commander, Sweden in the early 1600s became a sort of Nordic Israel (which must also make Swedish leftists cringe). Sweden was a poor, thinly populated nation that couldn't match the resources of larger rivals such as France and Russia.

So, Gustavus Adolphus had to devise a more flexible, mobile form of warfare. In an age when armies consisted of poorly paid and underfed peasants and mercenaries more likely to loot their own fellow citizens than fight the enemy, Sweden maintained a professional and well-trained standing army. Swedish troops maneuvered tactically in smaller, flexible companies instead of the cumbersome formations of their enemies. While 17th Century armies were transitioning from swords and pikes to muskets and artillery, Gustavus Adolphus increased the number of gunpowder weapons. Most artillery of the era had little battlefield mobility, but the Swedish king equipped his infantry regiments with their own light, mobile field guns that could support the foot soldiers throughout the battle.

During the Thirty Years War of 1618-48, Swedish forces advanced so far south that they almost captured Prague and Vienna deep in Central Europe. Their crowning achievement was the Battle of Breitenfeld in September 1631, when a Protestant army of 23,000 Swedes and 18,000 Saxons nearly wiped out a Catholic Holy Roman Empire force of 35,000 men, and lost just 5,500 men in the process.

Gustavus Adolphus fell at the Battle of Lutzen in 1632 (though his army still won). But in a succession of conflicts with IKEA-like names such as the Torstenson War, Swedish forces performed well against the Danes, Norwegians, Dutch, Poles and Russians. Sweden seized large parts of today's eastern Germany and Poland, and became a major Baltic power.

And then Sweden decided to invade Russia in 1708.

Can you guess how this going to end?

The Great Northern War of 1700-1721 pitted a Swedish-led coalition against a Russian-led alliance. The Swedes were commanded by young Charles XII, a clever, energetic ruler dubbed the “Lion of the North” and the “Swedish Meteor.” But Russia was led by the legendary Peter the Great, who eventually turned his large but poor nation into a major European power. At stake was Swedish control of swathes of Eastern and Central Europe, and more important, who would be the dominant power in the Baltic.

Charles XII marched into Russia with just 40,000 men, a small force compared to the 500,000 of Napoleon's Grande Armee of 1812, or the 3 million men of Hitler's Operation Barbarossa. Yet the war began well for the Swedes. It knocked Denmark-Norway and the Polish-Lithuanian Empire out of the war. But as in later conflicts, there was still the Russian colossus to contend with.

Yet waging war with small, hard-hitting armies was a strategy that worked for Sweden before. So why shouldn't it work again? At Narva in today's Estonia in 1700, 12,000 Swedes outnumbered nearly 3 to 1 almost wiped out a 37,000-strong Russian force during a battle fought in a blizzard. In many ways, the struggle resembled World War II, where smaller but proficient German forces defeated larger but clumsier Soviet armies.

Unfortunately for the Swedish Meteor, the Russians also used a strategy that had always worked for them. Their armies withdrew deep into the vastness of Mother Russia, leaving “scorched earth” in their wake and precious little for the Swedish soldiers and horses to eat. Meanwhile, Russian columns ambushed and destroyed Swedish reinforcements that Charles desperately needed to replenish his battered army.

Then came the Great Frost of 1709, the coldest winter that Europe had experienced in the previous 500 years, which of course turned Russia into a vast freezer that could sustain human life under the right conditions. For a Swedish army deprived of shelter and food in a scorched landscape, the conditions were anything but right. More than 2,000 Swedes died from the cold in a single night. Those who have seen the photos of frozen German soldiers at Moscow and Stalingrad can imagine what the boys from Stockholm must have looked like.

The tombstone of the Swedish Empire was carved at the Battle of Poltava in central Ukraine in June 1709. The summer after the Great Frost saw the Swedish army shrink to 20,000 soldiers and 34 cannon. Ever the aggressive monarch, Charles XII laid siege to Poltava. Peter intervened with a relief force of 80,000 men. The Russian troops first resisted a Swedish charge (wounds had forced Charles to relinquish command of his army). The Russians then counterattacked with their superior numbers, enveloping and routing the Swedish forces.

The Swedes suffered about 19,000 casualties, almost their entire force. The Russians also suffered. But as later invaders were to learn, the Russians could replace their losses while the invaders could not.

Charles left Russia with 543 survivors. Sweden lost its Baltic territories, and never regained its vast possessions or military glory. Soon the Swedish Empire was no more.

To be fair to the Lion of the North, Charles XII had no crystal ball to foresee what would happen to Napoleon and Hitler when they invaded Russia. The more interesting question is why Napoleon and Hitler didn't learn from the fate of Charles XII. It is curious that over the course of 250 years, three European kings and dictators fought a campaign in Russia in the dead of winter. None succeeded.

Nonetheless, there is a story that soon after Napoleon invaded Russia in June 1812, the Tsar dispatched General Balashov with a letter urging peace. When Napoleon said he would defeat Russia, Balashov is said to have warned him: “The Russians, like the French, say that all roads lead to Rome. The road to Moscow is a matter of choice. Charles XII went via Poltava.”