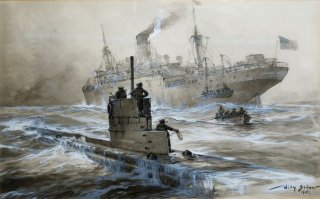 Here's What You Need to Remember: The U.S. Navy responded with overwhelming force against a potential threat to the continental United States—but proved too willing to bend its principles on the treatment of prisoners of war, escalating the use of torture when the prisoners did not confirm the interrogator’s incorrect assumptions, as often happens.

In March, the Allies intercepted a message from German Admiral Godt dispatching seven Type IX long-range submarines to “attack targets in American coastal zone” as part of an attack group awesomely codenamed Seewolf. Another intercepted message diverted to the U.S. coast the U-Boat of Captain Friedrich Steinhoff, who had earlier commanded U-511 in tests of rocket artillery that could be fired underwater.

Meanwhile, the Kriegsmarine continuously micromanaged the approach vectors of its submarines via radio transmissions. These were intercepted by Allied intelligence, giving the U.S. Navy a fairly good idea of where the U-Boats were approaching from. However, bad weather prevented the aircraft aboard the escort carriers from patrolling as actively as desired