Hitler Failed to Capture Moscow. This Game Lets You Try For Yourself. 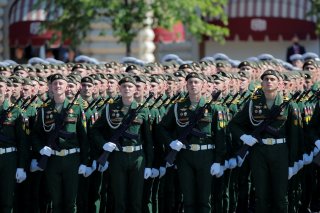 Here's What You Need To Remember: The Soviets begin the game outnumbered, disorganized and badly positioned. But if they can hold on, the German advance will grind to a halt. Then the Red Army can conduct a counteroffensive in December and January, as Siberian tanks and infantry pound the depleted German forces.

After seventy-five years, the question remains so tantalizing: What if the Germans had captured Moscow in December 1941? Would the Soviet Union have collapsed or continued to fight? Would the Russian war machine have been so crippled that Germany could transfer its armies west to crush the Anglo-Americans, or would the Eastern Front continue to bleed the German armies dry?

As it was, German spearheads may have reached as close as ten miles to the Soviet capital, perhaps even glimpsing the spires of the Kremlin. Seizing Moscow may or may not have won World War II for Nazi Germany, but it certainly would have made the Third Reich’s defeat more difficult.

Drive on Moscow is a computer game of Operation Typhoon, the German offensive to capture the Kremlin. Available for the iPad and PC, it puts two players in command of the German and Soviet armies.

The map, divided into spaces like Risk, stretches from Bryansk and Rzhev in the south, to Kalinin and Kursk in the east and west, and then north to Moscow. The terrain offers advantages for both attacker and defender: a mixture of open country ideal for panzers, forests and cities that shelter Soviet infantry, plus rivers that hamper offensive operations.

The Germans start with all of their forces on the map, with about fifty infantry corps and assorted panzer and motorized infantry divisions. The Soviets start with fewer troops, but they get plentiful reinforcements over time, including elite Siberian troops trained and equipped for winter operations. Each unit is marked with one to six dots representing strength points, which denote how many times a unit fires during combat, and also how many losses it can absorb.

The mechanics of Drive on Moscow are simple and abstract. Players activate a single area at a time by clicking on it with a mouse or tapping a touchscreen. Once activated, all the units in that space can move or fight. Infantry can move one space and mechanized units two; the catch is that armor only moves two spaces if it travels along a road or railroad, which tends to channel the German advance along transportation lines.

Units that enter a space with enemy units must attack. The combat system is short and subtle. During combat, a unit fires once per strength point. Each infantry point has a 30 percent chance of hitting, while armor has a 40 percent chance. Elite units, which include some German panzer divisions and Soviet Guards armies, get a bonus when attacking, as do tanks assaulting foot infantry. Defensive terrain, such as woods, cities and rivers, reduces the number of hits inflicted. Each hit eliminates one strength point, and may also force enemy units to retreat.

Not only does armor have a greater chance of inflicting hits, but it also can achieve breakthroughs. If all defenders are eliminated, mechanized units can immediately move one or two additional space and attack again. More than firepower, it’s that blitzkrieg bonus exploitation and attack that makes the panzers so deadly.

Yet while this system reflects the superior firepower of tank formations, it also underscores their fragility. Units are eliminated when they lose all their strength points, and most German mechanized units have just one to three points, while German infantry corps and Russian armies have five or six. The panzers can dish out damage, but they can’t take it. Constant combat will inevitably blunt the sharp end of the German mechanized spearheads.

Supply is brutal. Units that are surrounded by enemy-controlled spaces can’t trace supply, which means they can’t move or attack unless a relief force reestablishes contact. Troops which remain out of supply lose strength points are eventually eliminated. However, the Germans do have air resupply early in the game to succor isolated units.

By far the most clever game mechanic in Drive on Moscow is how it treats the concept of time, which is the lifeblood of military operations. Each game turn represents 72 to 120 hours, or three to five days of real time. In theory, a player should be able to activate his armies until all of them have been used. But every time a player activates his armies in a space, between zero and eighteen hours of game time are considered to have elapsed (more time is consumed during bad-weather turns, reflecting the difficulty of fighting in mud or snow). Once enough hours have passed, the turn is over and a new turn begins. This means that during clear weather in the early part of the game, the Germans have time to activate most of their armies. But during bad weather, the Germans might only get a chance to move and fight with a few units before the turn ends.

Operation Barbarossa began with a bang in June 1941, when the Germans devoured Soviet troops, inflicting five million casualties in five months. It ended in Moscow in December 1941, when the Wehrmacht ran out of fuel, ammunition and food. Not only was there a shortage of supplies, but what supplies there were couldn’t be transported forward quickly enough over horse-drawn carts, destroyed Russian rail lines and severely inadequate truck capacity. Thus, in Drive on Moscow, a certain number of German mechanized units will be immobilized each turn to reflect fuel shortages. In addition, while the Soviet get replacements each turn to replenish depleted units on the map, the Germans only get a handful of replacements, especially for the vital mechanized units.

As if supply wasn’t bad enough, the cold Russian weather is coming, and General Winter takes no prisoners. The weather is clear when the game begins at the end of September. It turns to mud in October, which limits movement and mechanized breakthroughs. Mud becomes frost in November, which actually helps the Germans by freezing rivers and forests. December brings snow, which limits German but not Soviet movement and combat breakthroughs. Unfortunately, December is when the Soviets get their powerful Siberian reinforcements, just as the German spearheads are low on troops and supplies.

Drive on Moscow, like Operation Typhoon, is a race against time. Like a badly wounded tiger, the Germans are formidable, but their strength is slipping away with every passing day. The Germans must seize Moscow before they are crippled by bad weather, lack of supply and replacements, and massive Soviet reinforcements. If they can’t seize Moscow, they may be able to eke out a victory by taking multiple cities such as Orel and Kalinin.

The Soviets begin the game outnumbered, disorganized and badly positioned. But if they can hold on, the German advance will grind to a halt. Then the Red Army can conduct a counteroffensive in December and January, as Siberian tanks and infantry pound the depleted German forces.

Drive on Moscow can be played solitaire against the AI, but it also can be played human-versus-human over the Internet. It is a tense contest between two desperate armies fighting at the limits of their endurance.

Can you change history? Drive on Moscow gives you the chance to find out.

Michael Peck is a frequent contributor to the National Interest and is a regular writer for many outlets like WarIsBoring. He can be found on Twitter and Facebook. This article first appeared in December 2016.