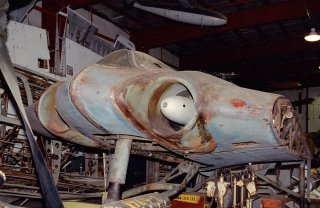 Here's what you need to know: While it may be a stretch to claim that the Ho 229 was intended to be a stealth aircraft, there’s little doubt that it pioneered design features that continue to see use in low-observable aircraft today.

Flying wing designs were not an entirely new idea and had been used before in both gliders and powered aircraft. During World War II, Northrop developed its own high-performing XB-35 flying wing bomber for the U.S. military, though it failed to enter mass production. Despite the aerodynamic advantages, the lack of a tail tended to make fly-wing aircraft prone to uncontrolled yaws and stalls.

Because of the Ho 229’s great speed—it was believed the production version would be able to attain 975 kilometers per hour—it was repurposed to serve as a fighter with a planned armament of two heavy Mark 103 thirty-millimeter cannons. Construction of four new prototypes—numbered V3 through V6—was initiated, two of which would have been two-seat night fighters.

The Ho 229 might have been a formidable adversary over the skies of World War II, but in truth, the plane was far from ready for mass production by the war’s end. While it seems a stretch to claim that the Ho 229 was intended to be a stealth aircraft, there’s little doubt that it pioneered design features that continue to see use in low-observable aircraft today.

This piece first appeared in 2016 and is being republished due to reader interest.